Approximately 750 members of the Mercian Regiment, Grenadier Guards and The Queen's Royal Hussars - including veterans and marching bands paraded through the city centre on 27 June at 11 am, ahead of the national Armed Forces Day on 30 June. Everyone finished up at Worcester Racecourse for a great day of racing! 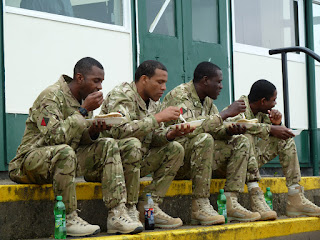 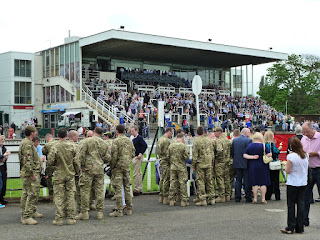 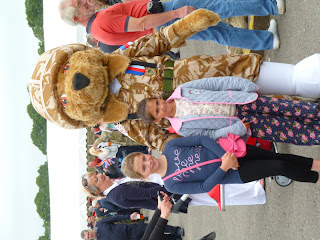 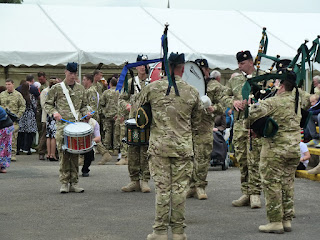 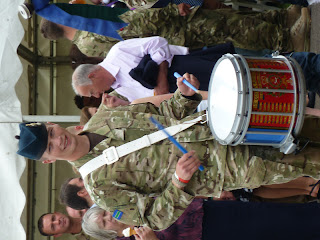 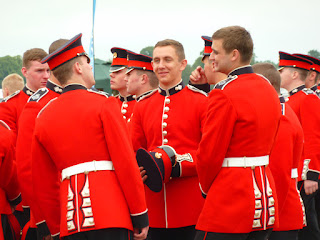 Posted by Worcester Racecourse at 12:29

The week in racing!

Running a racecourse and producing decent, even ground in the current unpredictable weather conditions is a serious challenge. Last Monday, after a weekend of heavy rain, most of which we experienced on the racecourse stand at the Malvern Three Counties Show, the going was put out as ‘good to soft, good in places’ in the back straight and ‘soft, heavy in places’ in the home straight. Such were the subsequent drying conditions and the gloriously sunny day for racing on Wednesday, that the going by race time had switched to ‘good’ all round. One of the difficulties we face is that the home straight, nearest to the river, is lower lying than the back straight and therefore tends to be that bit softer when we have significant rain.

Senior citizen in racing terms, 12 year old Midnight Gold stormed to victory in the handicap chase for his new trainer, Julian Smith from Tirley in Gloucestershire on Senior Citizen’s Special Package day. The horse has benefited from a switch from Peter Bowen to a smaller yard and rewarded the three owning members of the Blue Skies syndicate with a 28/1 win. Former Royal Ascot runner, Enroller was sent off 8/11 favourite for the novice claiming hurdle but could only manage second place behind Edlomond trained by Bill Turner.

Richard Phillips continued his good run of form with a win from Rich Buddy under Richard Johnson, who had previously pulled up at the course in May, and a further two third placed horses on the day.

New trainer and former champion point to point jockey, Richard Woollacott, took just 11 days to record his first winner under rules. Parkham Jack who is by Grape Tree Road and related to the useful Paxford Jack and Ballyfitz, ran into second place in the Ladies’ Day bumper on 9th June and followed up nicely with a win in the maiden hurdle.

Broadwas on Teme trainer, James Evans, has now had a double at the course at consecutive meetings with Mexican Bob, firstly under Grand National winning jockey, Liam Treadwell and last week under Robert Kirk.

Paul Nicholls and his assistant, Dan Skelton made the journey from Ditcheat to Worcester but had an unusually disappointing afternoon with the results from their five runners reading 2 / 2 / 6 / 6 / 11.

On a more successful note, Claines trainer Richard Newland had a great evening in the ‘monsoon’ that was Ffos Las on Thursday. Stage Acclaim, who won the Uttoxeter two mile seller the previous week, took the four runner feature £20,000 handicap chase by storm to win comfortably, and stable mate, Smalib Monterg followed up in the handicap hurdle run almost in the dark at 9.20pm, to give the trainer a double on the night.

Armed Forces Celebration raceday tomorrow, in aid of Help for Heroes, offers the public the chance for the first time ever FREE entry to the centre course enclosure. Visitors to the racecourse will have the chance to meet meet service men and women as well as veterans from the Mercians, the Queen’s Royal Hussars and the Grenadier Guards.

Gates open at 12 noon and the first race is due off at 2.10pm. If you are coming along, have a great day!
Posted by Worcester Racecourse at 12:23

Tomorrow is an extra special day in Worcester, particularly for the racecourse. Approximately 750 members of the Mercian Regiment, Grenadier Guards and The Queen's Royal Hussars - including veterans and marching bands - will parade through the city centre on 27th June at 11 am, ahead of the national Armed Forces Day on 30 June.

Gates will be open from 12 Noon onwards, and as an extra bonus on the day, there will be FREE ENTRY FOR ALL to the CENTRE COURSE ENCLOSURE. If you fancy popping along, join us for a great day of celebration and racing! 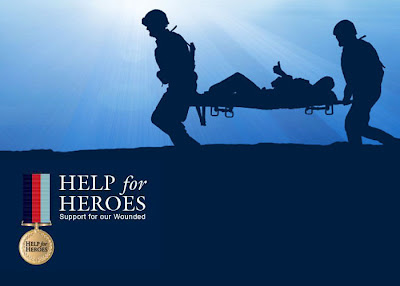 Posted by Worcester Racecourse at 10:26

Today at the races!

Doubles and trebles were the order of Worcester’s Festival of Racing weekend – and we are referring to the racing rather than bar sales!

Out of luck at Pitchcroft’s first two meetings, champion jockey Tony McCoy, stormed back with a vengeance recording a treble in front of a packed Ladies’ Day crowd. The first two legs came in the opening novice handicap chase and the beginners’ chase. Both horses, Sagredo and Caddie Master were trained by Jonjo O’Neill and owned by JP McManus. O’Neill won the same beginners’ chase in 2006 and 2011 and boasted a 31% strike rate for the 14 days leading into the Festival weekend. Rebecca Curtis sent My Lad Percy from Newport in west Wales to give the Champ his third victory of the day in the bumper.

Trainer Richard Phillips is currently in the form of his life and even he was taken by surprise at his Ladies’ Day double, when Mr Tingle and Saticon stormed first past the post in the consecutive novice and handicap hurdles. Phillips, who was unable to recall when he last had a double, commented he was delighted, "Having had more seconds than the Liberal Democrats of late!".

The annual Valerie Lewis Memorial handicap chase, first run in 2005, was a competitive affair with the trainer / jockey, father / son combination of Brendan Powell and Brendan Powell junior teaming up to win comfortably with Shoreacres. The same pair scored again on the Sunday with Benny’s Wall in the handicap chase.

Sue Gardner from Longdown in Devon sent out the first double of her training career on Countryside day when Miss Saffron beat Paul Nicholls’ Minella Stars in the £11,000 novice chase, and Southway Star followed up in the conditional jockeys’ handicap hurdle.

Another father and son, trainer / jockey combination, John and Joe Cornwall, were on the score sheet with the unlikely Mad Professor who was 1 win from 62 runs going into the Handicap chase.

All in all, an excellent weekend’s racing in front of a 10,500 strong crowd over the two days.

Tony Carroll from Cropthorne has a summer jumping superstar on his hands with Jolly Roger. The five year old has won six races from six starts since April, four of these in nine days and all six in just 33 days. The wins have come with two at Uttoxeter, and one each at Cartmel, Newton Abbott, Hereford and Aintree, all under conditional, Lee Edwards. The horse will now head for the Galway hurdle following a short break.

Worcester based freelance jockey, Tommy Phelan has started the season well. With just ten wins on the board last season, he rode a double at Newton Abbott last week, bringing his total to six wins in the first two months of the new season.

Today sees the annual Senior Citizens’ raceday at Pitchcroft, when the discounted package tickets will be available to purchase at the gates.

The first race is due off at 2.10pm. If you are coming along, have a great day!
Posted by Worcester Racecourse at 10:40

There is only one Hunters’ Chase run at Worcester every year and there won’t be many more touching stories than the one involving the local winner of the race run at the last meeting. Trained just four miles from the course at Lower Broadheath by Paul Senter, the Wife’s Sister was sent off at odds of 100-1. The race had been the target for her since Christmas, mainly because it would be close by for Paul’s Mum, Rose, to come and watch. Sadly Rose died a few days before the race but Senter and owner, Dawn Pugh, who is the scorer at Worcester County Cricket ground and who was also celebrating her 60th birthday, decided to run the horse for Rose. When The Wife’s Sister passed the post in front, giving Senter his first winner under rules, Pugh described the cheering from friends and family as akin to Manchester United scoring a winning goal!

In other news from the meeting, Claines trained Wakeboard whose previous run was in the Topham at Aintree put in a better performance in the handicap chase to come a close second behind Paul Nicholls’ Spock.  Jockey Richard Johnson’s parents, Susan and Keith, celebrated an owner/trainer victory in the concluding handicap hurdle with Themanfromfraam ridden by Adam Wedge. Shaun Lycett made a promising start to the defence of his Worcester trainer’s title when Ironical and new recruit to the yard, Weapon of War, who had been off the track for 766 days, both came second in their respective handicap hurdle and novice hurdle.

Another lady celebrating her 60th birthday was Gail Hewitt whose daughter and son-in–law Kirsty and Mark Bettis from Bromsgrove sponsored the bumper in her name. Little did she know until after the race, that winner Broadway Buffalo who is trained by David Pipe, was the first runner for England rugby international Mark Cueto and Welsh international Andy Powell. Purchased recently at Cheltenham, the horse stayed on strongly to win by 10 lengths and his pedigree suggests he will go further in time. The second placed horse in the race, The Stout Italian who was also having his debut run, went through the Doncaster sales ring fetching his reserve price of £45,000 last week. Trainer Kim Bailey was out of luck with his offer of free training for 11 months if the horse made his reserve, as the son of Milan was purchased by bloodstock agent Aiden Murphy and will now be trained by Ben De Haan. One lucky punter went home happy having placed a £5 placepot bet and was the only person on course to win. The bet paid a staggering £26,000 on the night!
Posted by Worcester Racecourse at 11:25