It’s not everyone who would think of naming a horse Romeo is Bleeding, so when the horse with this name won the opening Handicap Chase at Pitchcroft last week I decided to find out a bit more about him.

The eleven year old first ran at Worcester in May last year when trained by David Rees. He went on to win a point to point back in March this year for trainer Carl Price and is now trained in Chepstow by Ron Harris, a predominantly flat trainer.  He has had 4 runs since June for Harris and all have been at Worcester. The form of his previous 3 runs was 22P – the victory last week was his first win under rules.  The gelding is by Carroll House out of an Irish mare, Ean Eile so there is no clue to the source of his unusual name there.

On further research, I discovered that the name actually comes from a song written in 1978 by the American singer/song writer, Tom Waits.

Often, racehorses will have a ‘stable’ name used by those who own and look after them on a daily basis, and a more formal ‘racing’ name which has to be approved by and registered with Weatherbys in Northampton before the horse can race.  The ‘formal’ names are often derived from those of the horse’s sire and/or dam.

The local success story of last week’s meeting was the victory of one of Richard Newland’s new recruits, McGroarty.  The horse has been with Newland for just over a month, during which he has posted a second and a win at Market Rasen. 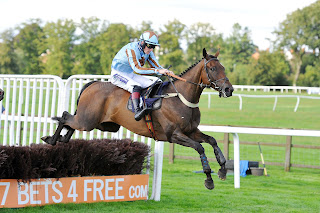 The six year old ex pointer won a bumper for former trainer, David Kiely in Ireland in June.  Carrying top weight, the Brian Boru gelding was sent off at 2-1 for the 2 mile novice hurdle and won comfortably under Sam Twiston-Davies by 5 lengths. There is obviously more to come and as the race was a qualifier for the 7bets4free.com £25,000 final at Worcester on 25th October, he must be considered as a possible contender for this race.

I always find it interesting to follow the fortunes of horses who have run at Worcester and one such horse caught my eye in the week.

Casino Markets trained by Emma Lavelle won 2 handicap chases at Worcester in July of last year, including the Pershore Plum Festival Land O’Plums chase, ridden by Aidan Coleman and Daryl Jacob respectively.  However it was Leighton Aspell in the saddle when Lavelle sent the horse to Saratoga in the USA last week, as her first ever runner in America.  The race was the Grade 1 New York Turf Writers Cup handicap hurdle and the prize fund was $150,000.  The American owned horse ran well and the report of the race reads that from midfield, he made a brief effort approaching the last but weakened on the flat into 8th place.  Time will tell whether he will further his American racing career.

The first race is due off tonight at 4.35pm for our final evening meeting of the season.
Posted by Worcester Racecourse at 10:26

With 12 race meetings at Pitchcroft in 12 weeks, it was time for short break to rest and refresh the track ready for the remaining 8 meetings, the first of which is tomorrow evening.

During the rest period the track has been vertidrained to allow moisture to penetrate and ease compaction, and a seaweed dressing has been applied to strengthen the turf.

Before the break, we enjoyed 2 meetings in quick succession from which a number of things stood out.

The first was a day of double for trainers Donald McCain and Richard Newland, with horses ridden by Will Kennedy and Sam Twiston-Davies respectively, the latter riding his 800th winner of his career on the day.

McCain sent out Court Dismissed and Thyne for Gold to win the first 2 chases at odds of 12-1 and 8-1. By contrast, Newland’s runners, Mr Caffrey and Lovato were sent off at 6/4 and 7/4 favourites, both following up on last time out wins.

At the second meeting, horse number one in race one was the 2015 Cheltenham Festival Stayers Hurdle winner, Cole Harden. The horse first ran at Worcester in August 2013 when he won a National Hunt flat race.  In total, he has run in 24 races under rules and has won or been placed in 18 of those.  Unfortunately, chasing does not seem to be his game however, as he has now been beaten at odds on in all 3 runs over fences.

Ten-year old, former Worcester winner Ginger Fizz, trained by Ben Case was 4 years older than any of her rivals in the mare’s handicap hurdle. Defying the age difference, she beat regular runner at Worcester, Solstalla by 5 lengths under Daryl Jacob who had flown in from France to ride the mare en route to the Galway festival. 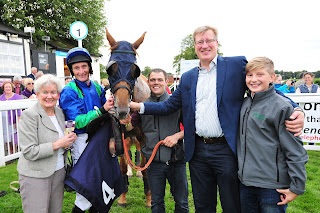 We have now had time to digest the recent publication of the 2018 fixture list.  This features a record of 1,508 meetings, 11 more than in 2017, and includes 19 fewer afternoons, but 30 additional evening meetings.

There will be a week-long break for jump racing after the 2017/2018 finale meeting at Sandown in April.  The first day of the new season will be at Uttoxeter on Saturday 5th May and Worcester’s season will begin on Thursday 10th May.

We will have 20 fixtures with very little change to the day/evening, weekday/weekend split.  The annual Ladies Day, always the best attended fixture, will be on Saturday 2nd June.

We will also feature a very special and unique raceday in 2018, when we look forward to celebrating 300 years of racing at Pitchcroft!

Throughout the year, we will be recalling many fascinating events, races, horses and personalities from our colourful 300-year history, all of which are currently being recorded in a must-read book to be published in the spring of next year – more details to follow as we approach 2018.

The gates open for racing tomorrow at 3pm with the first race due off at 5pm.  The card will feature a novelty hobby horse race in aid of Muscular Dystrophy at 5.40pm.
Posted by Worcester Racecourse at 09:00