It’s a bit like London buses. We had a gap between race meetings and then stage 3 fixtures in 8 days.  This means busy days for the ground staff, preparing the track and finding the delicate balance between the forecasted rain and the irrigation system to produce as near to ‘good’ ground as is possible.


As I Am, trained by Don Cantillon is an interesting contender for mare’s races going forward.  By Old Vic, the filly has won 4 of her last 5 outings, two of those at Worcester.


On Tuesday, giving plenty of weight away, the one-eyed five year old made all to win by 19 lengths.  She is a spirited sort and her trainer had the measure of her, pacing round the parade ring just ahead, whistling to keep her calm before the race.  It’s a formula that obviously works.


Claines trained Anton Dolin put a terrible run at Stratford behind him to follow up his recent Worcester win by taking the concluding handicap hurdle for Richard Newland.


Irish jockey Tom O’Brien came to the course for just two rides and was successful on both.  Anton Dolin was one, and the other was a surprise victory, even for connections.


Harangue, trained in County Galway by Paul Gilligan was the longest distance traveller of the meeting.  Sent off at odds of 33-1, his 3 most recent starts had resulted in defeat by a total of 187 lengths.   He must have had a good English breakfast because the five year old stormed home in the 2 mile 7 furlong handicap hurdle by 6 lengths.


It was Gilligan’s first runner at the course.  Another trainer trying Worcester for the first time was Mick Quinn.  Predominantly operating on the flat, Quinn formerly played centre forward for Liverpool and Newcastle. His horse Royal Defence came fourth in the novice handicap hurdle.


The real highlight of the day was the phenomenal ride given to Jonjo O’Neill’s Temple Lord in the handicap chase by Tony McCoy.  The grey’s only previous win came in 2009 at Folkestone where there was only one other finisher. To say the horse ran reluctantly is an understatement.  He was 8 lengths down at the last with 3 others between him and the winning post.  Somehow McCoy managed to get his nose in front on the line and was cheered not only by the crowd as he re-entered the parade ring, but also by various bookmakers, all aware that they were yet again witnessing a genius at his craft.


Wins on Rebecca Curtis’ Anger Management and O’Neill’s Don’t Be Late followed for McCoy.  No sooner had he weighed in after the 4.30pm ride on the aptly named Don’t Be Late, than he was off to ride for Warren Greatrex in the 5.50pm at Stratford.  A race he also won.


The fifth winner of the day for the incredible jockey was aboard Listen and Learn for boss, JP McManus.  The admiration for his amazing horsemanship continued well into the night on social media.


Today’s afternoon racing is an event incorporated into the Worcester Festival, whilst tomorrow’s meeting is the final evening fixture of the summer at Worcester. 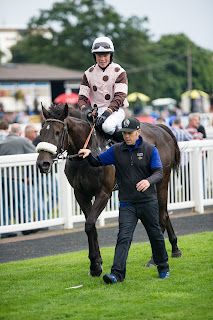 Posted by Worcester Racecourse at 14:37