Race meetings have come thick and fast at recently, with three in eleven days. It is important to be busy, however with two popular annual Stratford evening fixtures sandwiched in that period, coupled with the fact that there are only so many people who choose to go racing over eleven days in any one concentrated area, it lends weight to the argument that race planning sometimes needs more thought and at times, there can be just too much racing. Having said that, our meetings were well supported as well as being competitive.

The second fixture saw a welcome win following a lean period for the Ian Williams yard from Alvechurch. Williams brought a football theme to the evening with his two runners. Leath Acra Mor took the handicap hurdle under top weight for owners John O Shea, Stephen Hunt and Craig Gardner, and in the concluding race, hot favourite Tadabeer who is co-owned by Sir Alex Ferguson was just touched off into third place.

Our most recent meeting last week was staged on a very sad day for racing. Sir Henry Cecil had passed away that morning and as a mark of respect to allow time for reflection, we held a minute’s silence as the runners walked quietly round the parade ring before the first race.

On a happier note, Donald McCain had a successful trip down from with a double on the night. Separate Shadows, who got his nose in front in the novice hurdle, runs in the very famous Crazy Quilt colours, now belonging to Howard Spooner. These extremely distinctive colours are totally unique and used to belong to the Crazy Gang of comedians in the 1960’s. Almost certainly, colours like these would never be issued today.

Another notable owner was delighted with her McCain trained winner on the night. Diana Whateley, whose other horses include Menorah and Captain Chris, was particularly pleased to see confidence restored to first time blinkered Tornado Bob in the handicap hurdle after a very bad fall at Haydock.

Last weekend, we had a stand at the Royal Three Counties Show in Malvern. It was an excellent opportunity to meet many regular racegoers as well as making new acquaintances over the three days. On a wet weather walkabout, I was greatly interested to stumble across the 2004 Grand National third placed horse, Lord Atterbury, formerly with David Pipe, who at the age of 17 had been retrained and was enthusiastically taking part in the horse boarding slalom competition. It was a sport I had not previously come across but found riveting to watch.

The equestrian classes at the show included one for ‘race horse to riding horse’. It is always reassuring to hear of new avenues of activity for ex race horses.


Another big family event is due this Sunday at Pitchcroft. Our race day will include appearances by Fireman Sam, plus a charity Mascot Race in aid of The Children’s Trust with 19 mascots taking part at 2.30pm. The gates open at 11.50am. 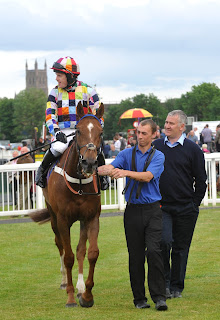 Posted by Worcester Racecourse at 14:11

A review of the scintillating CrownGate Ladies Day at Worcester Racecourse

If ever there was a champagne moment, it was at Worcester Racecourse on Saturday afternoon. On a day when record crowds enjoyed the racing whilst basking in the sunshine on the banks of the river , an emotional owner welcomed his horse back into the parade ring, having won the feature race of the day.

Peter Bowling is a great friend to the Racecourse and over several years has had 11 runners at the course, resulting in seven winners, two seconds and one third placed horse, with only one unplaced finisher. That is a wonderful strike rate for any owner. Pure Faith, trained in Wales by Peter Bowen gave Bowling his 25th winner under rules when, at odds of 20-1 he saw off Venetia Williams’ Ciceron in the Chemical Corporation 30th Anniversary Valerie Lewis Memorial handicap chase.

Formerly running against horses of the calibre of Kauto Star and Albertas Run, Pure Faith has dropped in the handicap in the last couple of years. Jim Lewis was on hand to present Bowling and co-owner, Simon Scott with the impressive annual silver trophy. Bowling’s former star, , who included two Badger Ales Chases, the Edward Hamner Chase and six wins from six starts at in his winning tally, is the most successful horse at the course in recent times.

Ruby Walsh’s decision last week to step down as number one stable jockey to former Champion trainer, Paul Nicholls will be much to the benefit of Daryl Jacob who now moves up to the coveted position at the Ditcheat stables. Jacob wasted little time in notching up his first winner since Walsh’s announcement and this was aboard Saint Roque in the handicap hurdle at on Saturday. The horse was following up a Fontwell win a week earlier and will probably go chasing from here due to an inevitable rise in the weights over hurdles.

Champion jockey AP McCoy was also on the score sheet on Saturday and has already taken the lead in the jockey table in defence of his 2012 title, following a delayed start due to injury. McCoy steered an exciting new JP McManus owned prospect home for trainer, Jonjo O’Neill in the second division of the bumper. Another Hero, who cost his owner 50,000 Euros, is a half brother to Supreme Novice winner, Back in Front and following his impressive debut under rules, the four year old is definitely one to watch going forward.

In further news of recent winners, Anquetta was recently sold at the DBS Doncaster sales for £24,000 to Cheltenham Gold Cup winning owner, Robert Waley-Cohen. The horse rewarded his new owner and jockey son, Sam by taking the two mile handicap chase at Newton Abbott under top weight and will remain on the go through the summer, staying on at Nicky Henderson’s Seven Barrows yard.

Interestingly, three of the victors from the 12th May meeting at have all come out and been successful again next time out, within two and a half weeks. The other two horses being Royal Knight, trained in Claines, and My Lad Percy.


We are hoping the weather stays fair for the evening meeting on Thursday when the first race is due off at 5.55pm. 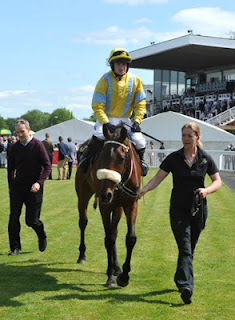 Posted by Worcester Racecourse at 14:57