For the first time we welcomed members of the British Horse Society to the Racecourse last week.  The day was intended to help fundraise for the very important equine welfare work undertaken annually by the charity, and also to raise awareness of their safety campaign requesting drivers to pass horses ‘wide and slow’ and to kill their speed to 15 mph.   This campaign has been sparked by a number of fatal accidents on British roads in recent years.

Two of the supporters of the day included first time Worcester race sponsors, Henry Oliver Racing and Hillgrove Stud, both of whom depend on horses for their living. Hillgrove Stud is based near Droitwich, and Liz Williams with her partner Max Young, breed and produce top quality dressage horses. Henry Oliver, former national hunt jockey turned trainer, is based at Abberley and runs a number of his horses at Worcester during the season. The British Horse Society reported that they raised over £1,500 through the generous donations of racegoers for which they were extremely grateful.

The opening race of the day, the Henry Oliver Racing Novice Chase was a very competitive affair, and included representatives from the top yards of Paul Nicholls, David Pipe, Donald McCain, Jonjo O’Neill and Phillip Hobbs. 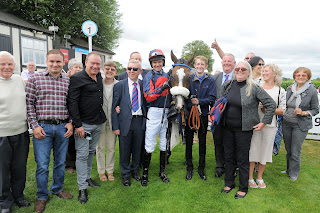 McCain’s Dr Massini gelding, What Happens Now (pictured above) was confidently steered to victory by Will Kennedy, seeing off the challenges of Tom Scudamore aboard David Pipe’s For ‘N’ Against by three quarters of a length. Kennedy, who began his association with McCain last season, has a 21% strike rate when riding for the Cheshire based trainer. What Happens Now, a former point to point winner, has won three of his four starts over fences and it would be no surprise to see him progress on from here, especially once the ground eases later in the year.

The race date last week clashed with a Stratford evening meeting.  Whilst the short hop from one course to another was ideal for the jockeys who were riding at both Worcester and Stratford, it is far from ideal to have two racecourses in such close proximity racing on the same day from a logistical point of view.  Not only does it split a local crowd of jump racing supporters, but there are also a good number of staff who make their living by working at several racecourses and they have to make difficult decisions when there is a clash.

The only clash at the vintage themed Ladies Evening race meeting tomorrow evening at Worcester, will be the sound of the instruments of the 28 strong members of the Royal Signals Band who will be welcoming racegoers from 3.30pm as they arrive at the course, as part of the Help for Heroes race night.  The first race is due off at 5pm.
Posted by Worcester Racecourse at 13:21

For those National Hunt sentimentalists amongst us, it was a pleasure to see the famous Red Rum colours carried by the Donald McCain trained Only a Tipple at the recent Pershore Plum Festival race evening. Red Rum is the only horse to have won the Grand National three times in 1973, 1974 and 1977 and the colours, which were also seen in the race in 1975 and 1976 when Red Rum came second, feature a yellow horizontal diamond which originated from the logo of the legendary horse’s owner, Noel Le Mare’s company, Northwest Construction. Only A Tipple is owned by Ginger McCain’s window, Beryl, and the 5-year old ran into 5th place in the Tiddesley Wood Yellow Egg Plum maiden hurdle.

The £12,000 feature Pershore Plum Festival Land O’Plums Chase was won by the progressive Casino Markets, following up his Worcester success earlier in the month. The Emma Lavelle trained gelding stayed on gamely to beat Richard Newland’s Tiger Trek, trained in Claines. The Land O’Plums chase appears to be a lucky one for Lavelle, whose horses are in excellent form.  The trainer has run 3 horses in the race in the last 6 years and all 3 have won.

National Hunt racing is returning this week from a 10-day break which allows jockeys in particular, to enjoy holidays with their families.  The jockey table at Worcester has never been more competitive, with the lead changing meeting to meeting.  Aidan Coleman is currently ahead of Sam Twiston-Davies by 4 points, largely due to his association with trainer Jonjo O’Neill. 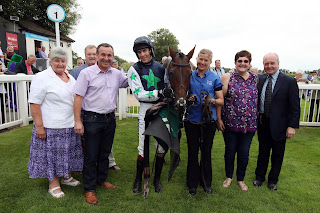 O’Neill has won the Worcester trainer championship for the past two years but has not had quite the same success this season until recently.  With Coleman on board, O’Neill enjoyed 2 winners from 7 runners at the last meeting, including Mr Shantu who is owned by long-time supporters of Worcester, Richard and Donna Evans.  Mr Shantu (pictured above) took gamely to his chasing debut, having also won a hurdle race at the course last summer. The trainer’s title is all to play for with just 3 points separating Dan Skelton, Philip Hobbs, Nicky Henderson and O’Neill.

The top owner’s position has also changed hands and is now held by JP McManus, again thanks to the recent good form of Coleman and O’Neill.

The 2017 racing fixture list was officially published last week.  There will be 14 more race meetings across the country in 2017 than in 2016, and the 1,496 meetings will be staged over 363 days of the year.  The only blank days for racing will be Christmas Eve and Christmas Day.

The total number of jumps fixtures are up to 602 from 594 and Worcester will be staging 20 fixtures from May 11 to October 25, which will include the ever popular Ladies Day, coinciding with Derby Day, on Saturday 3 June.

The gates open for afternoon racing tomorrow at 12 noon and the first race is due off at 2pm.
Posted by Worcester Racecourse at 14:40