A tale of two legends at Pitchcroft

There are two stories that have stood out at the racecourse this week for a number of reasons.

The first was the victory in the annual hunter chase of Stratford Stroller. The horse, who was runner up in a similar race at Bangor earlier this month, has tasted Worcester success in the past when in 2009, trained by Jonjo O’Neill, he was ridden to victory in a handicap hurdle by AP McCoy.

Enjoying her first win under rules, Josephine Banks from Himbleton had Stratford Stroller comfortably in the lead from the back straight, with the only looming danger being her sister, Abigail aboard Hall Kelly. Josephine and Abigail are two of the granddaughters of the owner of the 11 year old Beneficial gelding, the legendary Worcestershire lady point to point rider, Pat Tollit. The famous royal blue and cerise colours have been a major feature of West Midlands racing for over 90 years.

Tollit’s father, Major Harold Rushton rode 86 winners. Often referred to as the greatest point to point rider of all time, Tollit rode for 25 years winning 171 races with a strike rate of nearly 50%. To put this amazing achievement into perspective, these wins came in an era when lady jockeys were confined to ladies races, of which the opportunities were less than 15 rides per season. Tollit was the first lady jockey to ride over 100 winners.  Having won her first championship title in 1951, she finally retired at the Wheatland fixture in May 1973. It was an honour and a privilege to welcome Mrs Tollit into the winner’s enclosure at Worcester last Friday.

It was also a privilege to welcome a well-known, popular equine star on the same evening. 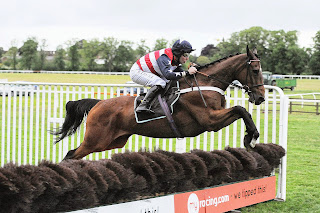 Magnificent in stature, to have a horse of the calibre of Hunt Ball running at Worcester was wonderful to watch for those of us who enjoy National Hunt racing. Bred in Ireland, Hunt Ball’s rags to riches story is well documented.

In the 2011 – 2012 season, he won a series of 7 races when trained by Keiran Burke for eccentric and at times, controversial owner, Anthony Knott. Hunt Ball went from a handicap mark of 69 to 154 before winning the Pulteney Land Investments handicap chase at the Cheltenham Festival in 2013. The fairytale ended for Knott and Burke and the horse was sold to American syndicate, Atlantic Equine, who sent him to race in the USA. He had 5 runs including the Breeders Cup Grand National Steeplechase, before being brought back to the UK and sent to Nicky Henderson’s yard in Lambourn. The well-loved chaser completed the Crabbies Grand National in 2014. 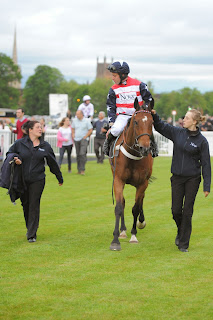 It was a pleasure to see him fly over the Worcester hurdles, ears pricked, always in the lead, never in any danger of being passed, enjoying his evening on the banks of the river Severn.

Whilst we can’t promise legendary owners or Cheltenham Festival winners tomorrow afternoon, we can be sure of exciting, competitive racing across our eight races. The gates open at 12.10pm.
Posted by Worcester Racecourse at 12:14

Racing is back in full swing at Pitchcroft.  The first meeting attracted 79 runners and a divided race, close to double the number of runners at either Wincanton or Newton Abbott on the same day. The popularity of the Worcester track amongst the trainers is further highlighted by the 151 entries for tomorrow evening’s card, including horses representing all the top National Hunt yards.

The weighing room is a different place without AP McCoy, however following in his mentor’s footsteps, a double at the first meeting has put Richie McClernon at the head of the Worcester jockey table at this early stage of the season.  Andrew Thornton, presently chasing his 1,000th winner, is in second place. The second leg of McClernon’s double was aboard Sir Note for Nick Littmoden, beating Worcester specialist, Anton Dolin who won twice at the course for Claines trainer, Richard Newland in 2013.

The winners of our selling races proved popular purchases last season and the first meeting continued that trend when French-bred, Vif Argent went under the hammer for 11,500 guineas. The six year old, trained by David Pipe has already run 31 times, winning 9 races under rules, including a Newbury handicap hurdle off a mark of 115 in February. 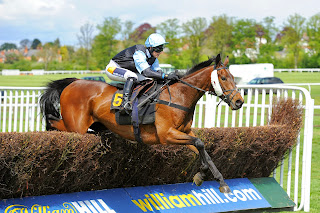 The in-form Dan Skelton, who trains at Alcester was on the score sheet in the opening race with a horse who has recently moved from Tony Carroll’s Cropthorne yard.  Thinger Licht (pictured above) was given a very confident ride by Bridget Andrews, fiancé of  Skelton’s brother and stable jockey, Harry. Andrews was riding her second winner from 3 mounts in 7 days, and managed to get a great tune out of Thinger Licht who has since gone on to be second under Andrews at Warwick, and to win at Kempton by 12 lengths under Harry Skelton, the horse’s third race in 6 days.

Flying the flag for Worcestershire National Hunt trainers currently is David Dennis, whose 140 acre training facility is located at Hanley Swan. Former jump jockey, Dennis rode over 240 winners during his 10 years in the saddle.  He started training in September 2013 and has horses running on the flat as well as over jumps.  Dennis’s winners in the last week alone have come at Southwell, Kempton, Bath and Market Rasen.

Chaddesley Corbett is the place to be on Bank Holiday Monday when the top English point to point jockeys will take on their Irish counterparts in the Anglo-Irish challenge 2015.

Tomorrow evening’s racing at Pitchcroft includes the annual Hargreave Hale Investment Manager’s Hunters’ Steeple Chase.  Always popular with the point to point crowd, the meeting promises to provide a great atmosphere, with the first race due off at 5.50pm.
Posted by Worcester Racecourse at 17:08

Thanks for the Worcester memories, AP!

The eagerly awaited, new summer jumping season at Worcester is under starter's orders and will begin on Thursday 7 May. However, an integral part of the recent history of the course, and indeed the sport of National Hunt racing, will be missing.

Quite simply, it will be a different place without 20 times champion jockey, Tony McCoy who retired at Sandown last Saturday. So much has already been said and written about the unique sportsman since he announced his retirement at Newbury in February. We would like to add our own tribute and reiterate how proud we are at Worcester that Pitchcroft will go down in history as AP's winning-most track. He rode an unbelievable 1,069 races at the course, winning 298 of those and creating a strike rate of 27.36%.

AP's obsession with winning has driven him through easy, as well as seemingly impossible victories, all of which we have witnessed with awe. But how many people know that in his quest to be the best, during his 25 year amateur and professional career, he has dieted and sweated away the equivalent weight of two African elephants, he has chipped 14 teeth, broken 13 bones and has taken more than 1,000 falls?

Our General Manager Jenny Cheshire recites a personal memory she has of his dedication to perfection... 'I shared breakfast at Cheltenham on Paddy Power Gold Cup Day with AP and John Francome following a 'behind the scenes' visit to the Morning Line. Whilst others tucked into a full English, AP's breakfast consisted merely of a strong cup of tea with 5 sugars.'

It is extraordinary to think that over a 35 year period since 1980, we have celebrated just 4 champion National Hunt jockeys: John Francome, Peter Scudamore, Richard Dunwoody and AP.

Life will go on at Pitchcroft however, with a season of 20 fixtures from 7th May to 21st October to look forward to. There is bound to be considerable interest in the jockey title this year, and new equine stars will emerge from our bumpers as they always do.

Whatever the season holds for us at Worcester, we thank AP for all the memories and wish him the very best for his retirement. 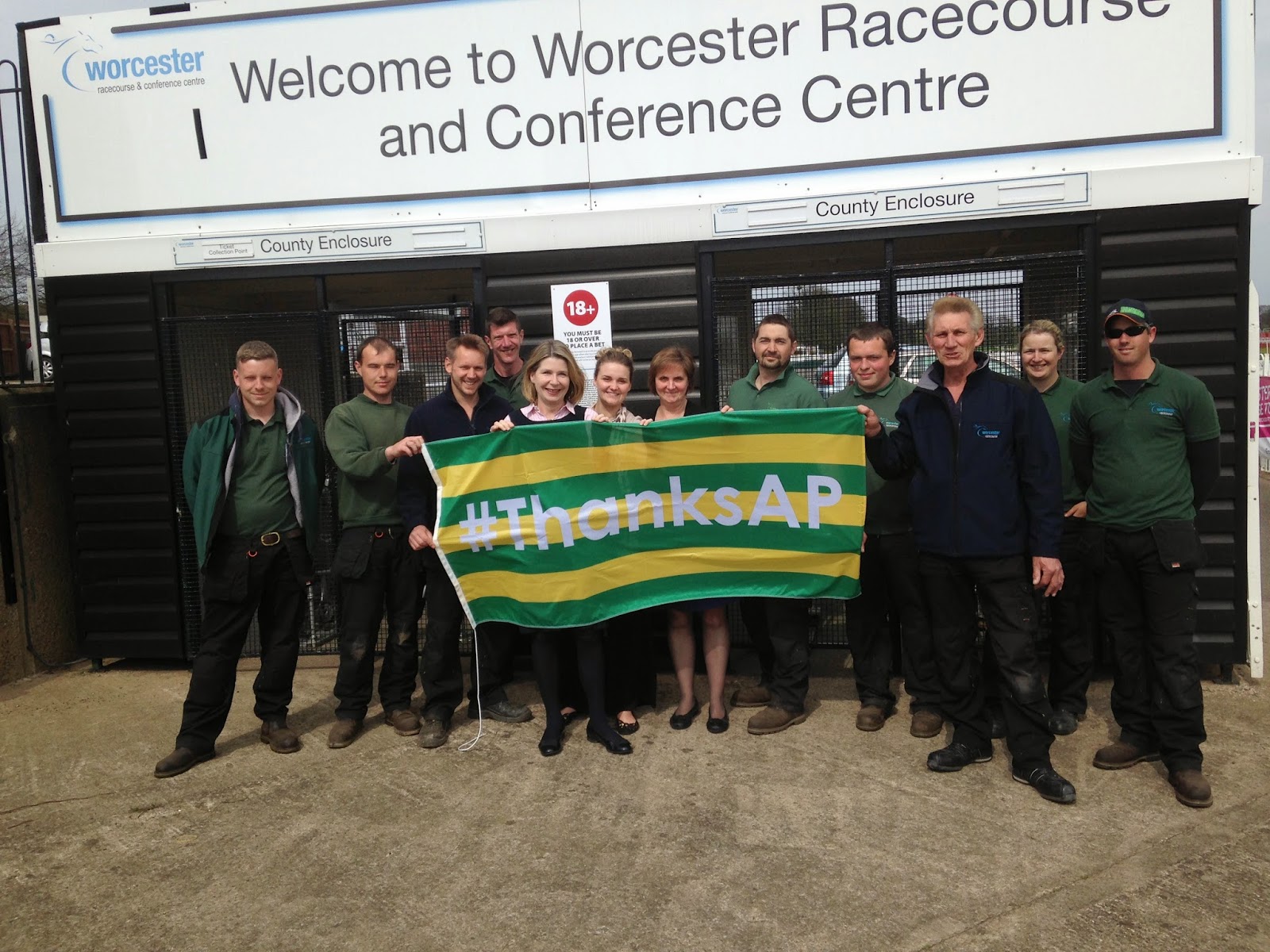 Posted by Worcester Racecourse at 17:28