National Hunt racing returned last weekend following the short September break.  The Worcester meeting prior to the break saw the ever-popular Hunt Ball return to the track after his hurdle win here in May (pictured coming into the Winners Enclosure further down the blog).  This was to be his prep run prior to the American Grand National on the 18th October.  Having enjoyed a short holiday over the summer, the 2012 Cheltenham Festival winner was a picture of calm and confidence with ears pricked as he jumped to perfection and enjoyed his tussle to the line with two time Worcester winner, Mont Choisy, ridden by Sam Twiston-Davies.  Jockey Andrew Tinkler, who will ride Hunt Ball in the big race in next month, commented that he loved the quick ground.  Giving weight away all round, Hunt Ball seems to relish small fields, as all three of his hurdling wins have come in four runner races. 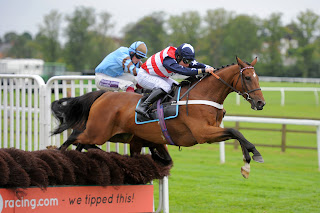 Sarah Henderson, daughter of trainer Nicky Henderson, accompanied the ten year old to Worcester and commented with a tinge of sadness, that Hunt Ball will travel to New York early in October and following the race in which he came 9th in 2013, he will remain in the US and run over timber under a new trainer. 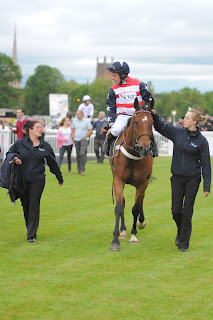 Hanley Swan trainer, David Dennis enjoyed further success at his local track on the same card when he sent out King’s Song to win the second division of the Hands and Heels handicap hurdle under amateur rider, Zak Baker.  However, there was a sting in the tail for Baker who broke the rules of the race by tapping his mount with the whip on the landing side of the last hurdle, which duly cost him a 7 day riding ban.

There is a new 95 minute documentary film on the horizon which will certainly be a must-see for all National Hunt racing fans.   The film has also been targeted at a much wider audience appeal with its tale of thrills, spills and brutal honesty.

Underlining its star quality, ‘Being AP’ was nominated from 6,000 films to one of only 400 screened at the Toronto International Film Festival last week.  The story follows AP McCoy’s final season in the saddle, although when the filming began, the crew had no idea it was to be the 20 times champion’s farewell season.

The early part of the story focuses on the extensive injuries McCoy sustained throughout his remarkable career and it includes a clip of his serious fall at Worcester last autumn, resulting in the shoulder injury which put paid to his dream of riding 300 winners in a season. The film has its UK premier on the 23rd November and will be in cinemas from the 27th.

With three quarters of the season’s meetings now under our belt for the season, we are seeing an interesting pattern of Worcester course specialists emerging, and it is particularly pleasing to see a number of horses who have run well in defeat over the summer, finally getting their noses in front.

Kinnersley based John Spearing, who trains Over the Air for owner/breeder Mrs Peter Badger, was delighted that the horse’s Worcester form over the past 13 months which reads 22433 improved last week to record a win in the concluding handicap hurdle under regular rider and Cheltenham Gold Cup winning jockey, Nico De Boinville.

In-form jockey, Will Kennedy commented that this is the first year he has been in the enviable position of being given the choice of decent horses to ride in races.  Kennedy was faced with a difficult decision for the opening handicap chase between Jonjo O’Neill’s Clubs Are Trumps and Cut the Corner who is trained in Claines by Richard Newland.

Kennedy is the only jockey to have ridden Clubs Are Trumps (pictured below) to his 5 wins to date, including a victory at Worcester in July.  The jockey has also enjoyed success on the Newland trained horses this year. 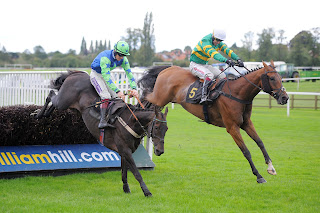 Swayed towards the proven Clubs Are Trumps, the race turned into a great tussle between the Flemensfirth gelding and the Sam Twiston-Davies ridden Cut the Corner, who has now posted three seconds at Pitchcroft this season.  Clubs Are Trumps held on to his narrow lead over the last fence to win by one and three quarter lengths.

Miss Tenacious proved to be third time lucky at the course on the same day, having run to second place at Pitchcroft twice this year, and most recently behind Worcester specialist, Fairyinthewind. This time the eight year old mare was ridden up with the pace in the feature chase, and managed to reverse the form with Fairyinthewind to win on the line for her owner/breeders, brothers John and Paul Frampton.

Recruits from Irish point to pointing make popular jumpers in this country, as the Evan Williams trained Roadie Joe showed when following up his August Worcester bumper win with success in last week’s maiden hurdle.  He could be a horse to look out for.

With the winter jumping season fast approaching and the ground turning a bit softer, a good number of National Hunt trainers and bloodstock agents flocked to Doncaster last week to the DBS September sales to stock up on new recruits.

Alcester trainer Dan Skelton paid £46,000 for Savello who won the 2014 Johnny Henderson Grand Annual Chase at the Cheltenham Festival and was sold by Gigginstown House Stud. Richard Newland was also in a buying mood, picking up 5 horses to bring his tally for winter jumping up to 16.

Rain doesn't dampen the spirits at the racecourse

Having enjoyed a particularly dry spell over the summer months at Pitchcroft, recently it has been more a case of it never rains but it pours.  We had two feature race meetings in 5 days in August and both were run in the rain.

Despite the inclement weather doing its best to spoil the party, interesting stories emerged from both meetings. 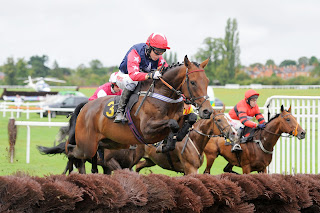 Dennis defied the interest of a telephone bidder in the subsequent auction but had to go up to 10,500 guineas to take the horse home.

Bromsgrove trainer, Claire Dyson enjoyed another winner at Worcester when Dr Dreamy came from off the pace to record his first win in 22 starts, and beat the course winning favourite, Patricktom Buru by half a length.

Horses for courses is a saying that is often proved to be accurate. Some horses just do perform better on specific tracks.

Two Worcester specialist mares were seen to great effect at the two meetings.  Fairyinthewind, formerly trained by Alan King and now with Brendan Powell, has run at the course 7 times and won on 5 of those occasions, the first was in April 2013.  I therefore find it amazing that even though she carried bottom weight, she was sent off at 25/1 in the recent £20k feature handicap chase, in which she was also the youngest horse in the race.

Fairyinthewind stayed on well and galloped her rivals into the ground to land the spoils.  There are plans to bring her back to the course in September when I very much doubt she will start at such a big price.

At First Light, one of only two horses that David Weston currently trains, boasts a 100% strike rate at Worcester this summer – three wins from three runs.

Up in trip, her latest victory came thanks in part to the final hurdle departure of John Ferguson's Great Fighter.  Following a break, we may well see her next in the new mare's race at Cheltenham.

We have seen a selection of Irish raiders at Worcester in August.  Gordon Elliott, Paul Flynn and John Joseph Hanlon have all sent runners over.

Hanlon's Nearest The Pin, a 2014 course winner, could only manage fourth place in the feature chase, but Baby Jake returned home the winner of the £8,500 handicap hurdle and may well return to the course again in September.