It’s not every trainer who wins two Grand National trophies in the same year. But then, Claines-based Richard Newland is certainly not every trainer. In April, Newland successfully lifted jump racing’s most prestigious prize at Aintree, and last week at Worcester, Lysino rewarded his trainer with the Grand National trophy won by the legendary Fred Rimell in 1970 with Gay Trip. The Fred Rimell memorial chase is one of the highlights of the Worcester racing calendar, and this year’s renewal saw Lysino settle far better than in his previous races to win by 18 lengths. Newland’s assistant, Rod Trow commented after the race that the horse has a ‘serious engine’, but being a buzzy sort, he is clearly not a straight forward ride.

The feature race on the card offered punters the best quality chase of the season at Worcester. The annual Richard Davis Memorial chase produced another winner with a promising future, and the second leg of a treble on the day for jockey, Tom Scudamore. Lookslikerainted is trained in Newport by Rebecca Curtis and was having his first run over fences. His trainer felt he would come on plenty for the run. Interestingly, the first three home in the race were all by top stallion, Milan.

The race was supported as always, by Richard Davis’s parents, John and Ann, whose guests on the day included Stan Mellor. Mellor was the first jockey to ride 1,000 winners and his inaugural ride was at Worcester, when aged just 15 in 1953.

One of the many things we enjoy about the racing at Worcester is looking out for those progressive horses who will take their experiences at Pitchcroft on to bigger and better things. A horse that falls into that category is Lady Buttons (pictured), trained by Philip Kirby in Middleham, 172 miles north of Worcester, for owner/breeders, Jayne and Keith Sivills. 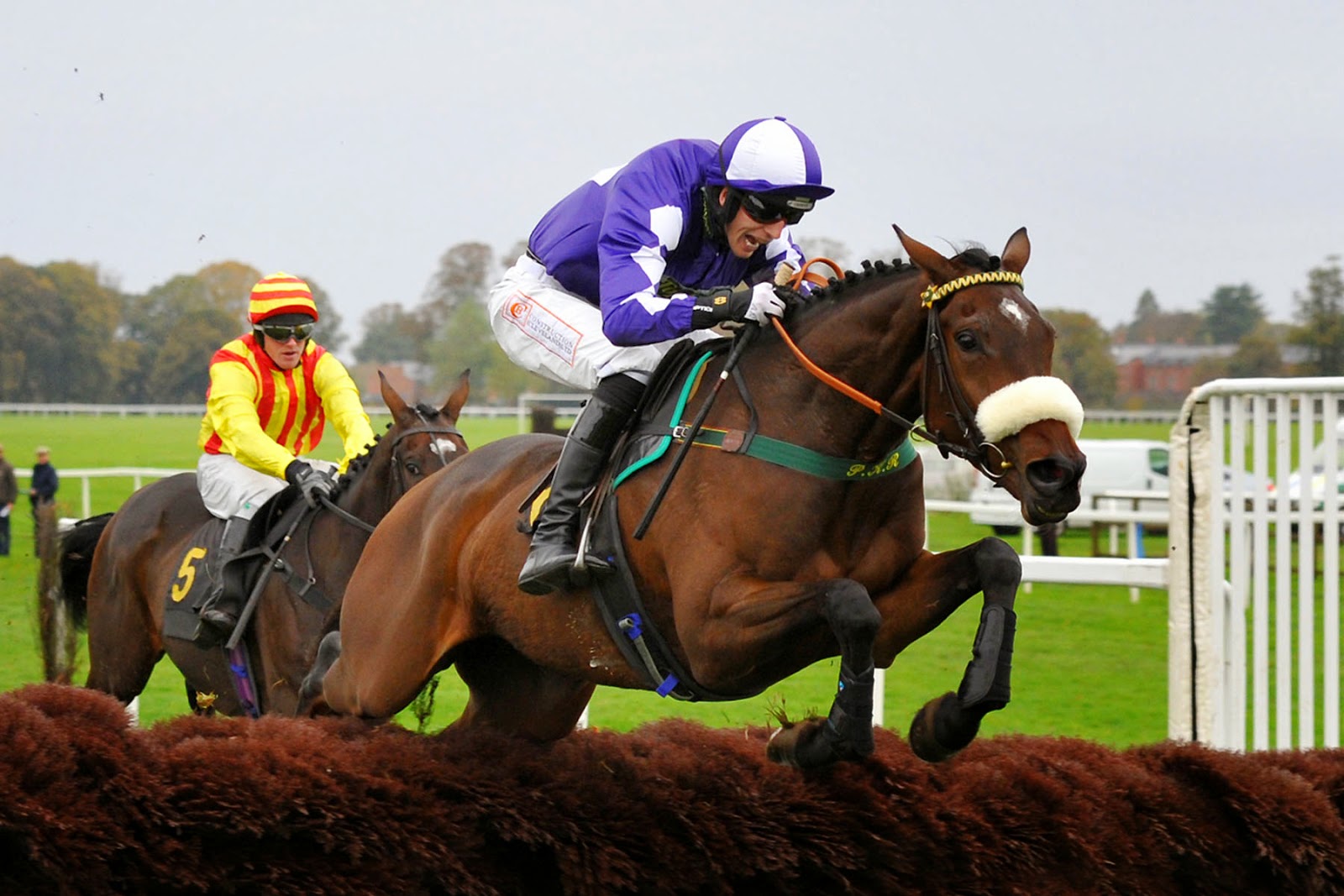 The 4 year old Beneficial filly is a dual Wetherby bumper winner last season, before finishing runner up by just a head, to Alan Kings’s Avispa in a 20-runner, listed Aintree bumper at the Grand National meeting in April. Lady Buttons’ pedigree is full of stamina and she made all on her hurdling debut at Worcester last week, jumping well to hold off the challenges of another useful-looking filly, Hurricane’s Girl, the first runner for the newly-formed Phil Tuffnal Racing Ltd who is trained by Jonjo O’Neill.

O’Neill has had an outstanding season at Worcester this year, as has champion jockey, Tony McCoy who has partnered the majority of the Jackdaws Castle winners. The season finale meeting at Pitchcroft tomorrow, where all 7 races have been sponsored for the first time by The King’s School, Worcester, will also see the conclusion of the 2014 Red Mills trainer’s championship at the course. The sponsors will be on hand to present 2 tonnes of their horse feed to O’Neill, who is streets ahead of his nearest rival.
Posted by Worcester Racecourse at 15:30

National Hunt racing fans up and down the country are gearing up for the thrill of the winter season because at last, the rain softened ground is starting to entice trainers to bring out their stable stars. We are seeing horses to follow for the coming months, one of which won the bumper at the most recent Worcester meeting.

It was a small but select field of 6, of which 5 horses had already won races, 4 of those were Irish maiden point to points. Masterplan (pictured) burst through his rivals to stay on strongly under a confident ride by Noel Fehily for Charlie Longsdon. The horse cost 25,000 gns at the Cheltenham May sale and is a 3 mile chaser in the making. 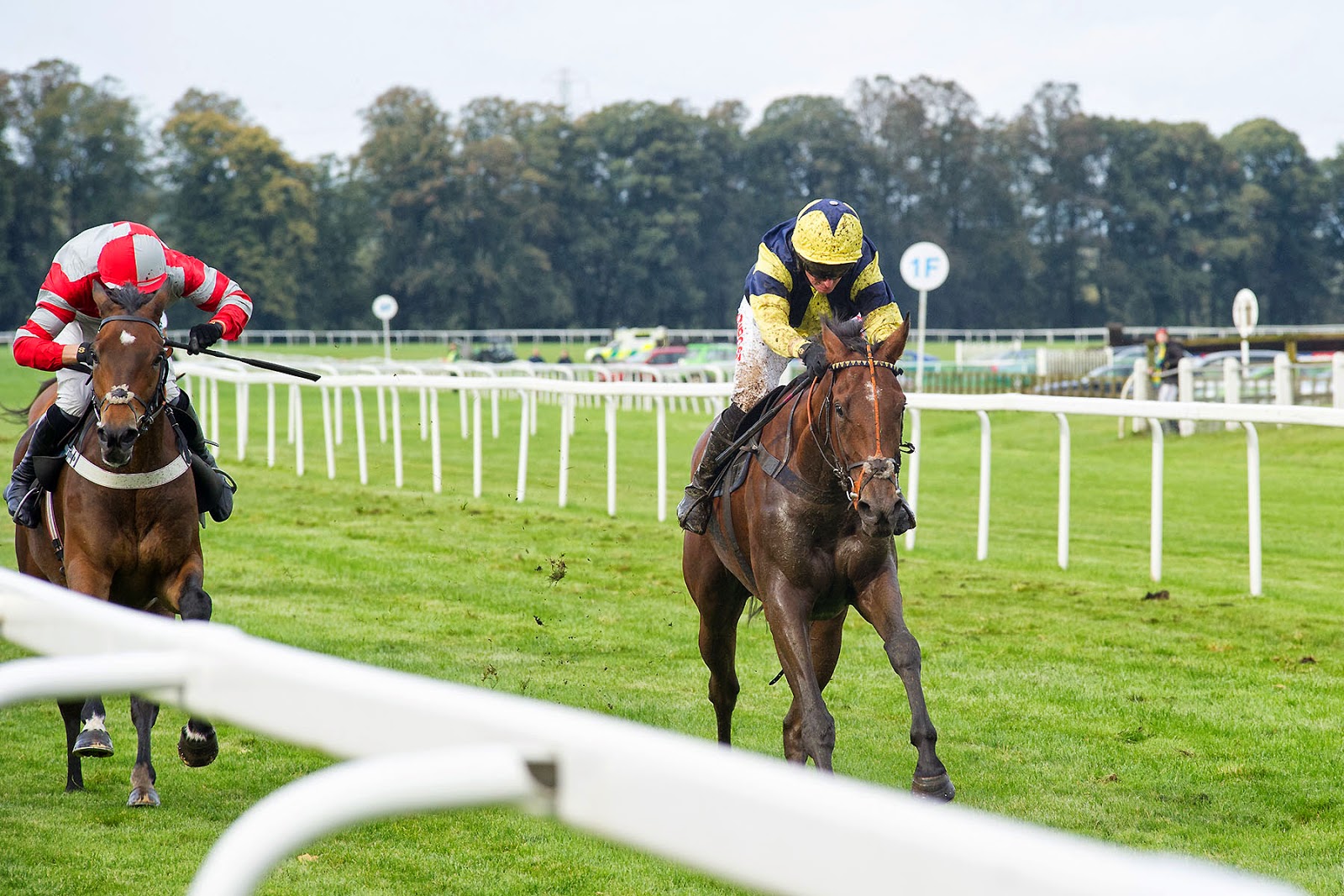 Another horse for the future was the winner of the maiden hurdle on the same card. Ballycoe was having his stable debut for Paul Nicholls and impressed jockey Sam Twiston-Davies to the point he commented the horse could well be a Welsh National type.

Conditional Tom Bellamy is sponsored by Stirrups restaurant at Cutnal Green and had his first winner for new boss Alan King at Exeter aboard Prettyasapicture. Bellamy was featured riding at Worcester in a recent Midlands Today racing special which spanned 4 nights.

Alan King also trains Shadarpour for a new syndicate set up by Arena Racing Company, owners of Worcester Racecourse. Formerly with Gary Moore, the horse had his first run for King in a handicap hurdle at Exeter which he won by 2 lengths under Wayne Hutchinson.

Another Worcester winner to watch this season is the impressive El Namoose, trained by John Ferguson. The 5 year old followed his recent Pitchcroft success with victory under champion jockey, AP McCoy in a Huntingdon bumper, winning on the bridle under a 10lb penalty. He has a quote of 33-1 for the Supreme and Neptune Novice hurdles at Cheltenham next March.

Cheltenham’s first meeting of the new winter season got underway last weekend, when three other Worcester winners shone again. Valerie Lewis Memorial chase winner at Worcester in June, The Romford Pele, who was also successful in the listed John Smiths Summer Cup at Uttoxeter, won a novice chase under Barry Geraghty for Rebecca Curtis. Curtis now has an eye on the Hennessy at Newbury for her future star.

Neil Mulholland has been scooping up the prizes recently and was rewarded at Cheltenham when The Young Master followed up his Worcester win by taking the Amateur Rider’s handicap chase. The horse has now won 7 of his previous 9 starts.

The third Worcester winner to taste success at Cheltenham over the weekend was Jonjo O’Neill’s In the Rough.  The 5 year old has stepped up in trip from his 3 wins this summer at Worcester and now looks set for a 3 mile chasing career.

Worcester’s meeting tomorrow has attracted 181 entries, significantly more than for recent meetings when the ground was quicker.
Posted by Worcester Racecourse at 10:00

A trainer currently going places, certainly as far as results at Worcester are concerned, is 33 year old Neil Mulholland who trains near Bath. The former apprentice to Aidan O'Brien, who is also the current champion trainer in Jersey, took out his licence in 2008 and secured his first ever training treble at Worcester's last meeting. Mulholland's Ashcott Boy (pictured) racked up a double at the last two consecutive Worcester meetings under Mark Quinlan, and maiden Jim Job Jones, who had pulled up on his previous 2 starts has proved a revelation, winning at Pitchcroft at odds of 20-1, and following this up with victory at Southwell last week when sent off at 2-1 favourite. 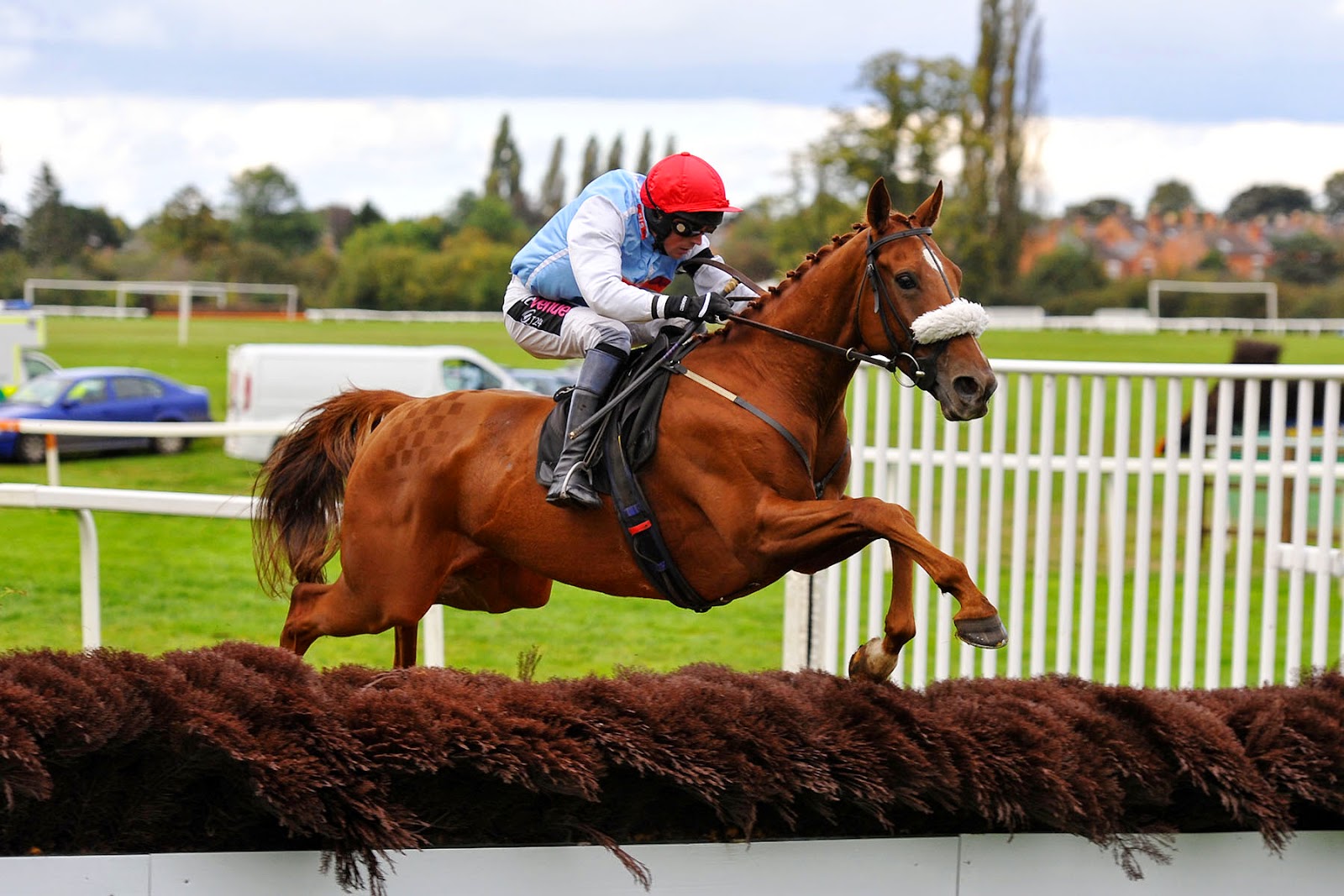 Irish trainer, Shark Hanlon rarely visits Pitchcroft and had never previously returned home across the Irish Sea with a Worcester winner under his belt. That all changed for the County Carlow trainer when Nearest the Pin won the £10k feature chase under a calculated ride by AP McCoy, one leg of a treble for McCoy on the day.

Claines trainer, Richard Newland demonstrated another example of how well he places his horses when Mart Lane won the £50k Class 1 listed handicap chase at Market Rasen under Daryl Jacob recently. Jacob gave the 9 year old an excellent hold-up ride, following the horse's summer break. Mart Lane had been pulled up in his 2 previous spring starts, including in the 30 runner Topham Chase at Aintree in April. Newland also had a winner at Chepstow's first jumps meeting of the new season last week.  Six year old Hawdyerwheesht, who ran at Worcester in early September, won the selling hurdle and was bought back in for 7,500 gns.

Cropthorne trainer, Tony Carroll tasted success at the same meeting when Taroum went one better than his Stratford 2nd place in September, by winning the handicap hurdle. Taroum has also run 4 times at Worcester, coming 3rd at his most recent attempt in August.

With the winter jumps horses slowly starting to emerge on the scene, and Cheltenham's first meeting of the new season due next Friday, entries for this week's Worcester meeting are encouraging in terms of numbers. We will be celebrating 50 years of the Injured Jockey's Fund and will be joined at the course by Chickey Oaksey, wife of the late Lord Oaksey. The IJF 50th Anniversary maiden hurdle is the final race on the card and has attracted 22 entries, including horses from the yards of Paul Nicholls, Rebecca Curtis and David Pipe. The first race tomorrow is due off at 2pm.
Posted by Worcester Racecourse at 16:01