Half way through the 2017 season at Pitchcroft

We certainly enjoyed the luck of the Irish at Pitchcroft’s Irish themed race meeting last week and were blessed with perfect weather for the occasion. Traditional music from the Emerald Isle courtesy of the Wild Murphys had everyone toe-tapping between races and contributed to a thoroughly good atmosphere created by the 2,500 racegoers who came out to support the course on a Tuesday evening.

On the track, it also paid to follow the Irish.

Of the 7 winners, four horses were bred in Ireland, and one each in France, Germany and England. Aidan Coleman, originally from County Cork was on flying form notching a treble on the night, the first race for Lambourn trainer, Jamie Snowden and the last two for Jonjo O’Neill, who himself originates from Co Cork.

The local success was the one of the stories of the night. Claines trainer, Richard Newland has always been a great supporter of his local track and this summer has sent Slim Pickens to run here four times.  The horse has been with Newland since May 2014 and first won a novice hurdle at Worcester under Sam Twiston-Davies in June of that year.

From 17 races, the consistent gelding has won 4 times and finished second 6 times. In his 5 runs at Worcester, he has never been out of the first two. In the previous 3 runs this summer he has come up against one just too good for him but has battled all the way to the line.  Finally, last Tuesday was his day.  In another exciting finish, he was driven out to beat Martin Keighley’s Buckle Street by a neck under a confident ride from conditional jockey, Charlie Hammond.  Just one and three-quarter lengths separated the first four horses home. 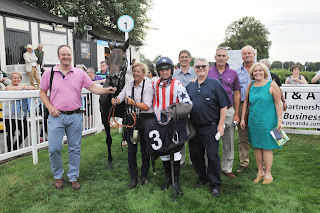 Another Irish jockey, Daryl Jacob had his first official ride as stable jockey to Bourton-on-the-Water trainer, Ben Pauling aboard Calva D’Honore at the same meeting. However, the jockey’s winner on the night came aboard 11/10 favourite, Taws for Rod Millman in the mare’s maiden hurdle, another qualifying race for the 7bets4free.com Fixed Brush Hurdle Series final in October.

The summer is flying by as it always seems to and so are the race meetings.  We have reached the half way point in the season and it is therefore timely to look at the leading jockey and trainer championships, both of which are proving to be fiercely competitive.

Champion jockey Richard Johnson leads Aidan Coleman by just 12 points at the top of the Cheltenham and Three Counties Race Club sponsored table. There are only 6 points separating the next 3 places occupied by Sam Twiston-Davies, Noel Fehily and Harry Skelton.

Jonjo O’Neill leads Dan Skelton and Nicky Henderson, both tying for second place in the Foran sponsored trainer’s competition, ahead of Richard Newland. We look forward to seeing how the second half of the season unfolds.

The gates open for afternoon racing tomorrow at 11.50am.
Posted by Worcester Racecourse at 09:00

Sometimes it literally pays to make a quick decision. Droitwich based race sponsors, Chess Plastics and their guests arrived in the paddock just in time to choose the Best Turned Out horse in their handicap hurdle at Worcester recently.

With moments to spare before the horses left the paddock for the start, they chose Amber Flush as the tidiest horse, making the day of birthday girl and groom, Amy Myatt.

In the excitement, some of the sponsors’ guests hastily placed a bet on Amber Flush, whose racecard form read 0P0PP-P.

The 8-year old took everyone by surprise, including her trainer, Clare Ellam, by bolting up in a decent sized field of 14 horses and winning at odds of 66-1! 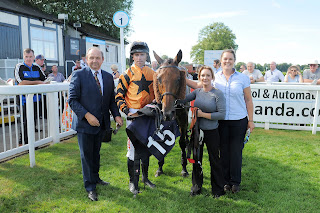 Not only were the sponsors and their guests delighted, but so was their trainer who has had a rough time in the past few weeks.

In April, Ellam ran Too Many Diamonds in a Taunton selling race where he was claimed by Dan Skelton and went on to win 4 races for his new trainer in 7 days. In June Ellam’s mare, Just Marion was sadly put down after an injury sustained from running loose with a blindfold on at Brighton.

The Bowen Family who train in Haverfordwest have always supported Worcester with runners, so it was good to see brothers Sean and James both riding winners on the same card.

Sean won the handicap chase on Dr Robin, trained by his father, Peter and co-owned by his mother, Karen, and 16-year old James rode his first winner under rules aboard Get Home Now.

The recent Racing Staff week highlighting the important jobs done by all staff in racing was celebrated at Worcester with a free hamper draw, the contents of which were donated by the Racecourse staff.

The prize was won by Trish Smith and Jodie Buck who both work for Ledbury based trainer Matt Sheppard.

It was with sadness that we learned of the death of Mercy Rimell at the age of 98 last week.  I met Mercy on a number of occasions when she visited Pitchcroft for her husband, Fred’s annual memorial race.  A point to point winning jockey at the age of just 14, Mercy was also the first woman to train a Champion Hurdle winner after she took over Fred’s training licence at their Kinnersley yard on his death in 1981.  Mercy’s first winner as a trainer was with Tru Mar at Worcester a month later. A very forthright lady, her extensive knowledge and wisdom will be sorely missed by many.

Dan Skelton’s useful mare Whatzdjazz followed up her May Worcester win with an impressive victory in the 7bets4free.com novice hurdle last week, reconfirming her qualification for the Fixed Brush Hurdle Series final at the track in October.  The 5-year old was one of 3 winners in a row for Coolmore stallion, Yeats.

It will be Leprechauns and Shamrocks to the fore tomorrow evening when the first race on Irish night is due off at 6pm.
Posted by Worcester Racecourse at 10:06

Back to back meetings at Pitchcroft deliver results for local trainers

There has been plenty of action down at Pitchcroft recently, with 2 race meeting in just 4 days.

The local trainers didn’t disappoint. Three of the 7 winners included Murray Mount trained at Abberley by Henry Oliver, Sweeping Rock trained by John Spearing at the Fred Rimell’s former yard in Kinnersley, and the last race went the way of Included trained by David Dennis at Hanley Swan.

The big story of the afternoon came in the £18,000 feature handicap hurdle. A very competitive affair, the strongly fancied Philip Hobbs / Diana Whateley gelding, Wishfull Dreaming went off a clear favourite.  However, in the end, the first three horses home mirrored the exact same result of a similar contest earlier in the month on Ladies Day.

Permit trainer, Rosemary Gasson was delighted to see Mr McGuiness get the better of Richard Newland’s Slim Pickens and Alan King’s Miss Crick for the second time at the course in just 3 weeks. Both Mr McGuiness and Slip Pickens hold entries for tomorrow’s Worcester meeting. 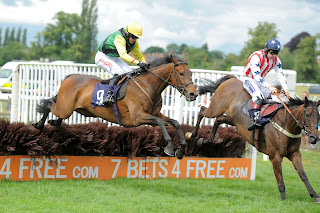 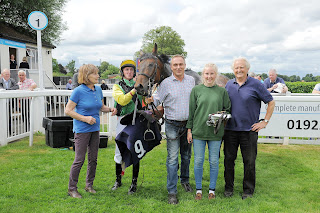 Three days later, we welcomed Britain’s Got Talent host, David Walliams to the racecourse for the first time, as guest speaker in the Birmingham City Football Club hospitality marquee.

Theo was purchased out of Shane Donohoe’s yard in Ireland recently, with only fair form and a bit of a ‘monkey’ reputation according to Newland’s assistant, Rod Trow. However, the 7-year old was on best behaviour, winning comfortably and seemingly relishing the change of scene, as further borne out by his Uttoxeter win on Sunday.

Roger Hart is very well known at Worcester and on the wider racing circuit as a tipster, Corporate raceday host and an organiser of ownership syndicates. He is less well known as an owner.  However, when Fort Worth trained by Jonjo O’Neill won on the bridle last week under a cool Aidan Coleman ride, a very excited Hart whooped his way across the parade ring to greet his winner.

Fort Worth was bought by O’Neill from Coolmore originally, and has run for O’Neil under different ownership until recently when Hart and 3 friends purchased the Presenting gelding, who jumped and stayed on impressively.

Hart tells the story that the ownership under which Fort Worth now runs, Sleeping Panther Racing, took its name from the many sleeping panther statues that can be seen on the streets of ‘Panther City’ as Fort Worth in Texas is nicknamed.

With Nicky Henderson on flying form last week, posting a treble and a third from his 4 runners, we look forward to the stories from tomorrow’s meeting, due off at 2.20pm.
Posted by Worcester Racecourse at 09:00