How many times at the race meeting on Wednesday did I hear ‘what a difference a week makes?’  It was quite unbelievable to be abandoning a meeting one week and watering the same ground 5 days later, which had turned almost ‘firm’.


Not to be deterred from running their horses at Worcester however, trainers made 313 entries for last week’s meeting at the 6 day stage, declaring 187 of these to run the day before racing.  Due to our stable capacity of 95 and the ‘runner per stable’ rule, 92 of these horses were unfortunately balloted out.  Worcester remains firmly on the map as a popular summer jumping course.


This summer’s National Hunt racing in our locale is a tale of three ‘Richards’.


Former champion point to point jockey, Richard Woollacott boasted a 50% strike rate from his runners over the 14 days prior to our meeting.  The wins included a double at Uttoxeter, one of which was with Vintage Tea who ran at Worcester’s Ladies’ Day in June.


Woops of encouragement from Woollacott rang around the parade ring on Wednesday, when his Allerford Jack just touched off David Rees’ Chandler’s Cross in the opening Handicap Chase.


Richard Phillips remains a close second to David Pipe in the Worcester trainer’s table and Claines trainer, Richard Newland is in the form of his life.


Newland’s Bobowen posted victories recently at Stratford and again on Thursday at Uttoxeter.  Smalib Monterg registered his third victory since being claimed in a Ludlow seller in April by winning the handicap hurdle at Newton Abbott in the week.  Paddy the Hare also came a good second in Uttoxeter’s beginner’s chase.


On the same card, Newland had a rare bumper runner, Rex Appeal who also put in an excellent performance only to be pipped on the line by a short head.


Another local trainer in great form currently is Tony Carroll.   Direct Flo gave Carroll a Worcester winner on Wednesday, after which Carroll declared the mare a sun worshipper, commenting ‘she likes it when the sun shines’.


The Kevin Morgan trained My Farmer Girl was one of three mares to take the honours at Pitchcroft.  Her owner/breeder, John Duckworth was pleased his perseverance paid off as he had travelled to the course from Glasgow the previous week to watch the mare run, only for the meeting to be abandoned.


Eyes will be on the Festival from Galway this coming week.  A number of British raiders are planning to make the trip with trainers Rebecca Curtis and Sophie Leech making entries for the Galway Plate, and Tim Vaughan, Donald McCain and Peter Bowen amongst 6 trainers with intended runners in the Galway Handicap Hurdle.


Worcester has its own feature night tomorrow when the Pershore Plum Festival family race evening will include the third running of the revived Land O’Plums Chase, formerly run at Pershore Racecourse in the early 1900’s.


It is also a night when the course supports Racing Welfare, a very worthy charity who looks after anyone in need, connected to the racing industry.  Silent auction lots will include Mornings on the Gallops generously donated by Jonjo O’Neill, Charlie Longsdon and Tim Vaughan. 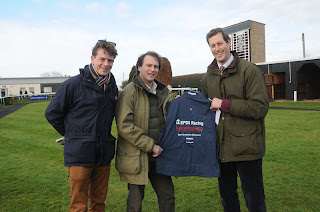 Posted by Worcester Racecourse at 19:19

Racing from the past week

Local successes at any race track are always heartening and last Wednesday at Worcester, in very testing and tiring conditions, four horses from our area put their noses in front to find themselves in the winner’s enclosure. The procession began in the first race with a horse appropriately named for the weather, Aqualung, trained at Alvechurch by Ian Williams. The race was a handicap chase sponsored by Chaddesly Corbett School, Winterfold House. Interestingly, Williams had arranged for a group of ladies from the Worcester based networking group, The Wednesday Club, to spend the morning on the gallops at his Dominion Racing Stables. The Ladies were delighted to see the trainer enjoy the first winner of the day from their hospitality marquee by the parade ring, where the guest of honour was Jenny Pitman. Williams had had 5 winners from his last 26 runners going into the meeting, giving him a good strike rate of 19%.

The John O’Shea trained Stafford Charlie from Newnham-on-Severn won the second race, followed by success for Paul Davies from Bromyard with Samtheman in the selling hurdle. Former trotting and point to point trainer as well as saddler Davies, was delighted with his first winner under rules, having also had a second placed horse just half an hour earlier in the bumper with outsider of the field, All Hope at 28/1.

Samtheman was ridden by the only lady jockey of the day, Alice Mills, and having previously recorded a win in a maiden point in May, the 7 year old romped home to win by 12 lengths at another decent price of 25/1.
Bidding in the subsequent auction went the way of jockey Tom Molloy on behalf of trainer, Graeme McPherson who paid 7,000 guineas for the horse.

The fifth race went to the Venetia Williams trained Cool Cascade from Hereford, with the last two prizes going to David Pipe’s yard in Somerset and Keith Goldworthy’s stables in Pembrokeshire. Pipe’s win propelled him to the top of the closely fought trainer’s table for the first time and left him clear of Richard Phillips by 7 points, which is less than one win ahead.

The majority of horses are finishing tired in these very wet conditions and field sizes are diminished as trainers are looking for better ground for their summer jumpers.

David Pipe’s aptly named Decoy had the field on the stretch in the feature handicap hurdle and Claines trained Stage Acclaim could only stay on for second place.
Richard Newland had better luck at Uttoxeter with Changing the Guard who came in by 26 lengths following a 71 day break, and continuing his run of good form, Bobowen won the Handicap Chase at Market Rasen by 12 lengths on Sunday.

As Ireland is the home of many jockeys currently riding on the circuit and indeed many of the horses in training originate from the Emerald Isle, it is fitting that Worcester celebrates the annual Irish race night tomorrow evening. Local band, The Roving Crows will entertain all in the County enclosure throughout the evening and the first race is due off at 6.10pm, with gates opening from 4.10pm.
Posted by Worcester Racecourse at 12:33

It has been another week where the weather has dominated the headlines! With freak storms and flash floods responsible for the very near abandonment of Newcastle’s three day Northumberland Plate meeting and Leicester suffered its third cancelled meeting in a row, Worcester was yet again fortunate to have a warm, sunny day for racing.

Emotions ran high at Pitchcroft on Wednesday as the troops of Worcester paraded through the town. The sight of so many soldiers in uniform relaxing with family and friends, the sound of the Heavy Cavalry and Cambrai band, pipes and drums and war horses parading on the track all contributed to the truly memorable atmosphere.

On a more sombre note, National Hunt racing lost one of its own this week when jockey Campbell Gillies tragically died in a swimming pool accident in Corfu. His weighing room colleagues sporting black arm bands stood in the parade ring alongside racegoers for a minute’s silence before the first race. The sadness is all the more poignant because Brindisi Breeze, the Lucinda Russell trained horse who provided Gillies with his first Cheltenham Festival winner in March was also recently killed in a freak road accident.

Through the season we have a number of Irish runners, former Grand National winning trainer Gordon Elliot brought two to the meeting last week.  Raajih won the handicap hurdle at Newton Abbot the previous evening under Katy Walsh, who had come from Ireland specially to take the ride. With an additional 7lb penalty for that win and Jason Maguire in the saddle, Raajih did well to give Elliot second place in our novice handicap hurdle behind shock winner of the day, Commanche Dream, who came in at 50/1, ending an 8 year losing spell for trainer Liam Grassick. The horse’s only previous success was at Uttoxeter in 2004.

On top form again was Richard Phillips who has now overtaken Paul Nicholls at the head of the Worcester trainer’s table. Saticon followed up his Ladies Day triumph with a win by just a head from Marju King in a driving finish under Tony McCoy. It was McCoy’s first ever victory for Phillips and brightened what had been a frustrating day of results for the champion jockey.

David Pipe’s Battlegroup was sent off 11/8 favourite for the opener. However the horse who is 0 from 7 over fences is inappropriately named as he certainly does not relish a battle and prefers to remain firmly with the group.

Dead heats are rare and we can only recall a couple at the course. However, the mares’ bumper produced a very exciting finish between Donald McCain’s Blue Article and David Pipe’s Too Generous and the judge was unable to split the two.

Ian Williams who trains at Alvechurch had his first winner of the season at the course when Fearless Leader took the first division of the novice handicap hurdle. Williams has more runners on the flat in the summer months.

Racing tomorrow afternoon starts and 2.10pm with the gates opening at 12.10pm.
Posted by Worcester Racecourse at 13:00