For the first time, we were delighted to welcome trainer Tom Gretton as a race sponsor to Worcester last week.

The Inkberrow trainer has been running his horses at the course over the summer and kindly agreed to sponsor the 2 mile handicap chase in aid of the Surrey based, Racehorse Sanctuary. The race turned into a well-supported, local affair with 6 of the 11 horses trained within an hour’s radius of Worcester.

The winner, Bandol is an 8-year old gelding, owned and trained at Abberley by former jump jockey, Henry Oliver.  The winning pointer had his first two runs under rules in bumpers at Worcester in 2012 and 2013 when trained by Laura Young. 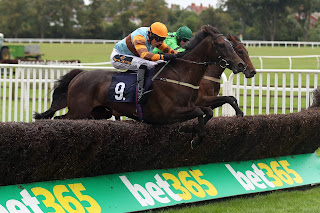 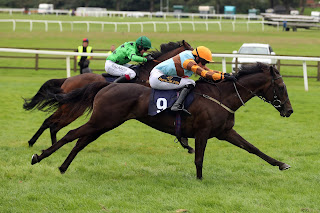 The second placed horse, Deise Vu is trained by Roy Brotherton at Pershore and has finished consistently in third place on his 4 previous outings, including at Pitchcroft in July.

A new lady trainer was granted her full licence 2 weeks ago. Former Manager of Hereford Racecourse and Bath Clerk of the Course, Katie Stephens’ first runner as a fully-fledged trainer was at Worcester with Zero Visibility who finished in third place in the opening handicap chase.

Another local story to emerge in the week was the excellent run by Gas Line Boy in the Kerry National at Listowel. Alvechurch based Ian Williams sent his 8-year old over to Ireland as the only British raider in the race. The horse made most of the running in testing ground under Tom Scudamore and finished a creditable third, despite making a few jumping errors.

Having fallen in the Crabbies Grand National in 2015 when trained by Philip Hobbs, Gas Line Boy then had a spell with Jim Best before moving to Williams’ yard in the spring of this year where he appears to be flourishing.

Richard Johnson and Tim Vaughan teamed up for a quick fire double in the opening two handicap chases at Pitchcroft last week, which was enough to move Johnson up to second place behind Aidan Coleman in the Worcester jockey table, with Sam Twiston-Davies 6 points behind.

The trainer table has never been more competitive.  Just 9 points (less than one win) separate the first 6 names – Philip Hobbs, Jonjo O’Neill, Dan Skelton, Nicky Henderson, Neil Mulholland and David Pipe.  As there are only two meetings left this season, it is impossible to predict how these two contests will finish.

Owner, JP McManus is 24 points clear of his nearest rival in the owner’s championship. Favourites Racing is the syndicate attached to the yard of Hanley Swan trainer, David Dennis.  Both owners have been fantastic supporters of the course with their runners throughout the summer, as well as in previous years.

The gates open for the popular annual raceday in aid of Macmillan Cancer Support at 12.20pm tomorrow.
Posted by Worcester Racecourse at 11:21

One of the things I most enjoy about the racedays is the interesting people I meet, week after week, both involved directly with the racing and also those visiting the course to enjoy a day out.

Last week I had the pleasure of talking to David Weston, a trainer from West Overton near Marlborough, following the win of his four-year old filly, Solstalla in the mare’s maiden hurdle. Weston’s breeding and training operation is very much a family affair which includes his partner and owner of Solstalla, El Tanner and their children. His national hunt horses, in the main, are ridden by Cheltenham Gold Cup winning jockey, Nico De Boinville, who Weston has known since he was 16.

Weston has an impressive strike rate at Worcester.  Four of the six horses he has run at the track have won.

Solstalla, who is by Halling out of a mare called Solstice, started her career on the flat and her last win came at Goodwood in 2015 as a three-year old.  The filly first ran at Pitchcroft on Pershore Plum Festival raceday in July when she came second, a run she followed up with a further second at Fontwell in August.

Another horse Weston has run at Worcester is the homebred, At First Light.  The mare was ridden by De Boinville to win three times from three runs at the course last summer.  Last week she had her first run of the season at Uttoxeter where she stayed on well to come second to Tim Vaughan’s Dovil’s Date.

The ‘banker’ of last week’s meeting was Vintage Vinnie who was having his first run of the season, back over hurdles.  The son of Vinnie Roe won on the bridle by 16 lengths and obviously goes well fresh because he also started his 2015 season with a win at Worcester last September under Leighton Aspel.

Vintage Vinnie is trained on the coast near Newport by Rebecca Curtis, who has a 25% strike rate for the horses she sends to Worcester.  The gelding’s form last season included a second in the Skybet Chase at Doncaster in January under Barry Geraghty.

With Richard Johnson riding at Perth last week, a win in the opening novice chase gave Aidan Coleman sufficient points to take the lead in the Worcester jockey table by 10 points from Sam Twiston-Davies and Richard Johnson.  The lads are fiercely competitive and they will be going all out at the final three meetings of the season to secure the top honours.

Dan Skelton has overtaken Nicky Henderson to take the second spot in the trainer’s table this week behind Philip Hobbs, thanks to a second place for his recent Worcester winning mare, Stephanie Frances in the opening novice chase.

More stories are sure to come from the race meeting at Worcester today, when the first race is due off at 2.10pm and the gates open at 12.10pm.

Posted by Worcester Racecourse at 09:03

Now we have arrived in September, with the winter National Hunt season just around the corner, racing at Worcester is on a countdown. Just 4 meetings remain between today and the finale on 19 October and the race to be the top 2016 Worcester jockey and trainer has never been closer.

As the table stands this week, Aidan Coleman is just two points ahead of Sam Twiston-Davies, with last year’s champion, Richard Johnson in third place just two points behind. Bearing in mind, 10 points are awarded for a win, the fiercely fought contest is starting to look very exciting.

Philip Hobbs leads Nicky Henderson by ten points on the trainer leader board, with Dan Skelton in third place by one point and last year’s winner, Jonjo O’Neill only a further point behind. Previous years domination by AP McCoy and Jonjo O’Neill are a thing of the past and both competitions look like going right to the wire on the 19 October.

One of the most interesting races on last Tuesday’s card, run under brilliant blue skies, was the 2 mile juvenile hurdle. The race is for 3 year olds and all bar one of the 9 runners were recruits from the flat, with very limited hurdling experience.

Sam Twiston-Davies notched up the first leg of a double on the day aboard the Paul Nicholls trained Cliffs of Dover, who seemed to take to the Worcester brush hurdles and relish the quicker ground.

Another horse switching from the flat to hurdles this summer at the age of 8, is Barwick, trained by George Baker in Manton. Barwick won Epsom’s Great Metropolitan Handicap back in April but rather lost his way after that. Drawing on his flat speed to good effect, he passed three horses on the run in under a skilful drive by Andrew Tinkler, to take the concluding maiden hurdle by a neck.

As the Worcester season draws to a close in October, we are all really looking forward to turning our attention to the re-opening of Hereford Racecourse. Whilst Hereford have hosted both Arab races and point to points over the past 4 years, the first National Hunt fixture to be staged there since the course closed in December 2012 will be on 6 October, a fixture which was transferred from Worcester. Three further fixtures will follow this year on 31 October, on 23 November and 19 December.

The staff from Worcester, as well as from a number of other ARC racecourses are currently working hard to help Hereford prepare for their big relaunch, which promises to be a historic day not to be missed.

Racing at Worcester resumes this afternoon, with the gates opening from 12.10pm and the first race is due off at 2.10pm.

Posted by Worcester Racecourse at 10:16

When you wake up in the morning and the sky is already blue, a rolling mist is hovering over the fields shrouding the mares and foals in a gentle veil before the heat of the day rises, you know it’s going to be a good day.  That was the feeling I had on the morning of last week’s Family Fun raceday at Worcester and I wasn’t to be disappointed.

A sizeable crowd turned out to enjoy the activities which included pony rides for all those would-be little jockeys and out on the track, there was plenty of excitement for keen National Hunt followers to get their teeth into.

Two horses in particular caught my eye.  Stephanie Frances, a King’s Theatre mare trained at Alcester by Dan Skelton and ridden by brother, Harry was returning to Worcester having won the British Stallion Studs EBF National Hunt Novice Hurdle at the course back in October 2014.

The mare just beat Theatre Flame, a fellow King’s Theatre progeny on his chasing debut, in the opening Novice Chase.  Stephanie Frances went off 4/9 favourite, having cruised to victory at Southwell the previous Sunday.  Her outing prior to that was in the Grade 1 OLBG Mare’s Hurdle at the Cheltenham Festival in March where she ran creditably to finish 10 lengths behind Willie Mullins’ Vroum Vroum Mag.  The plan going forward is to give her a short break before the listed novice chase for mares at Bangor in November.

One of our feature races of the season is a £20,000 Handicap Chase run over two miles, which went the way of Croco Bay trained by Ben Case and owned by Lady Jane Grosvenor.  Croco Bay was also returning to Worcester on the back of a 3rd place in a handicap chase in August 2014.

Prior to this Worcester success, Croco Bay’s previous three outings were all high profile ones.  The nine year-old ran in the Johnny Henderson Grand Annual at Cheltenham in March, he was fifth behind Katachenko in the Betfred Red Rum handicap chase at the Grand National Festival at Aintree in April, and also ran in the Guinness Handicap Chase at the Punchestown Festival in April, where he finished in fourth place behind Irish Cavalier.  The next target will be a valuable handicap chase at Market Rasen where he will step up to 2 miles and 5 furlongs in September.

Tomorrow evening’s race meeting will conclude what has been another busy month of racing at Pitchcroft, and with a rare juvenile hurdle on the card, it will be interesting to think we may be witnessing more stars of the future racing on the Worcester turf.

The first race is due off at 4.25pm with gates opening from 2.25pm.
Posted by Worcester Racecourse at 15:31