A Royal Winner on Ladies Day

‘Flaming June’ has different connotations. This was especially apparent during the recent Edwards Motors Ladies Day at Worcester Racecourse which dawned to the sound of roaring thunder with flash floods. Thankfully this gave way to glorious sunshine for an afternoon attended by 8,654 racegoers.


Ladies Day usually coincides with the meeting at Epsom, a day always enjoyed by the Queen.  This year, Her Majesty’s only runner of the day, Special Agent, was not at Epsom but was declared for the MPinches Transport sponsored bumper at , just 25 minutes ahead of the .


Jockey David Bass confirmed the Queen would be watching a recording of the race in the Royal Box. The gelding had been a non-runner at our previous meeting due to the softened ground but this time conditions suited and he stayed on well to beat Bobble Emerald. The future beholds well for Special Agent, trained by Nicky Henderson, who won the same bumper with smart hurdler, Mossley four years ago. 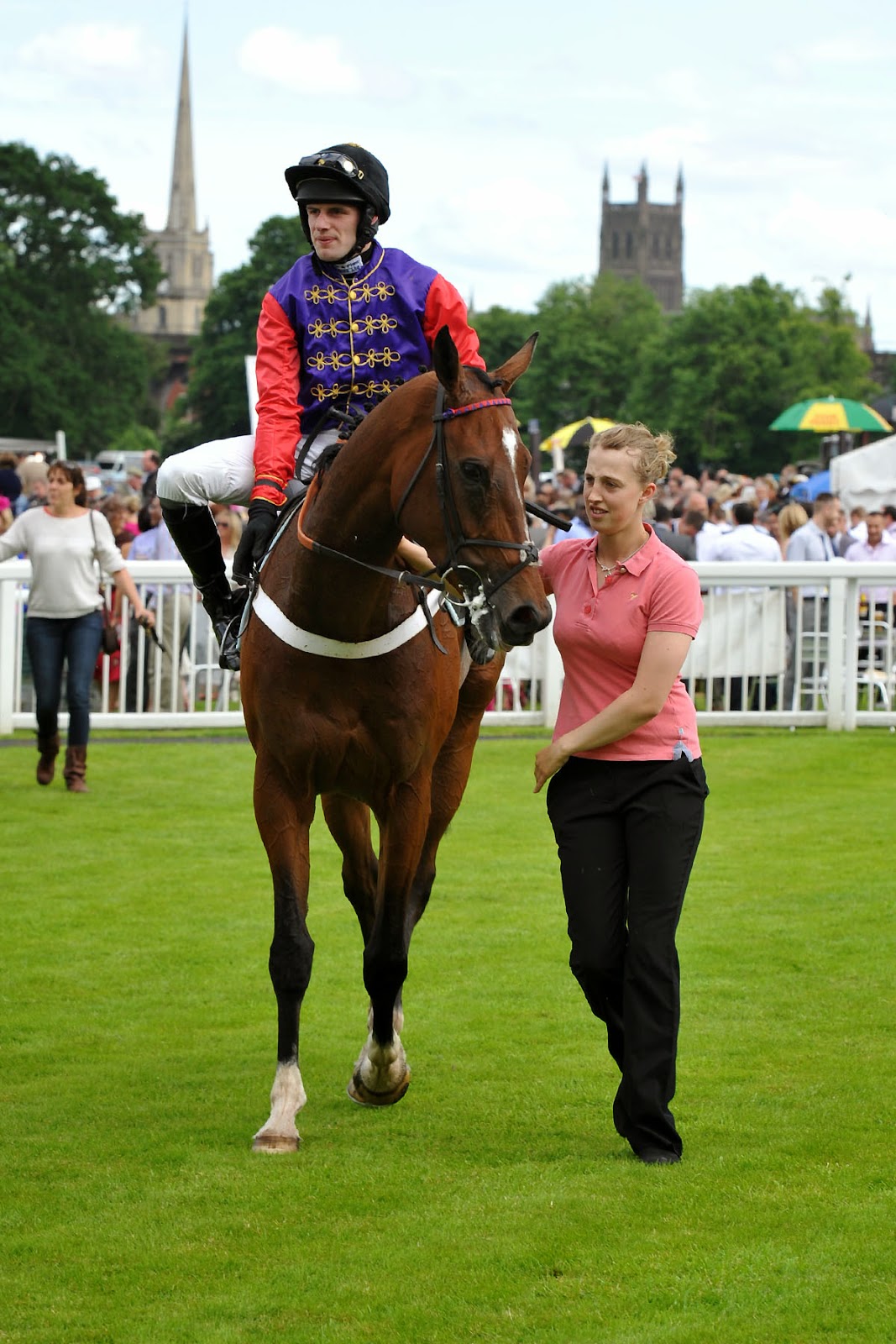 Local Cropthorne trainer, Tony Carroll had a great afternoon with an across the card double at Epsom and Worcester within 15 minutes. Great Link won the John Burke Memorial chase on the Ladies Day card.


Burke was former stable jockey to Kinnersley trainer, Fred Rimell and in 1976 became the fifth jockey in history to win the Cheltenham Gold Cup and the Grand National in the same year on Royal Frolic and Rag Trade.


Best Mate’s owner, Jim Lewis who turned 80 this week, made the annual trip to to support St Richard’s Hospice and the memorial handicap chase in honour of his wife, Valerie.


This year the race was won by The Romford Pele who came third in a novice chase at the Punchestown Festival in May and is now bound for the Galway Plate.


The Worcester evening meeting last week will go down in history as the night that 19 times champion jockey, Tony McCoy beat his own record which had stood for 10 years, when he rode the fastest ever 50th winner in one season. Coincidentally, the horse on which he achieved this milestone was Bob Keown who, like the Romford Pele is trained by Rebecca Curtis and runs in the same colours.


Claines trainer, Richard Newland gets the right tune out of just about every horse he trains these days. Neverownup won his fourth race in 3 weeks at Newton Abbott, the first of which was at .  Slim Pickens followed up his recent Southwell win just 7 days later at Worcester and Master of Deception added to Newland’s success at Aintree last weekend.


The Racecourse stand at the Malvern Three Counties Show was buzzing for three days over the weekend. For the first time, we took an equiciser training horse which attracted the attention of a multitude of budding jockeys, all keen to experience riding ‘jockey style’.


The same equiciser will be part of the numerous free attractions on offer at the Family Fun raceday at Pitchcroft this Sunday when the gates open at 12.20pm.
Posted by Worcester Racecourse at 10:26

Rain not an issue for the Henderson runner

The unpredictability of the British weather struck again last week. Over 2 inches of rain fell at Pitchcroft during the 7 days between race meetings resulting in the ground riding soft but thankfully safe.

Rain softened ground did not suit all 3 horses that Nicky Henderson declared for the Worcester News sponsored bumper. On the morning of racing, the decision was taken that flat bred, Special Agent, owned by the Queen would not appreciate the conditions and the gelding was withdrawn.

Henderson left Profit Commission in the race, a 33,000 Euro purchase by Presenting, but it was his second string horse, Leaderofthedance (pictured) who came out on top of the battle for victory with Bobble Emerald, owned by Arena Racing Company Chairman, David Thorpe. 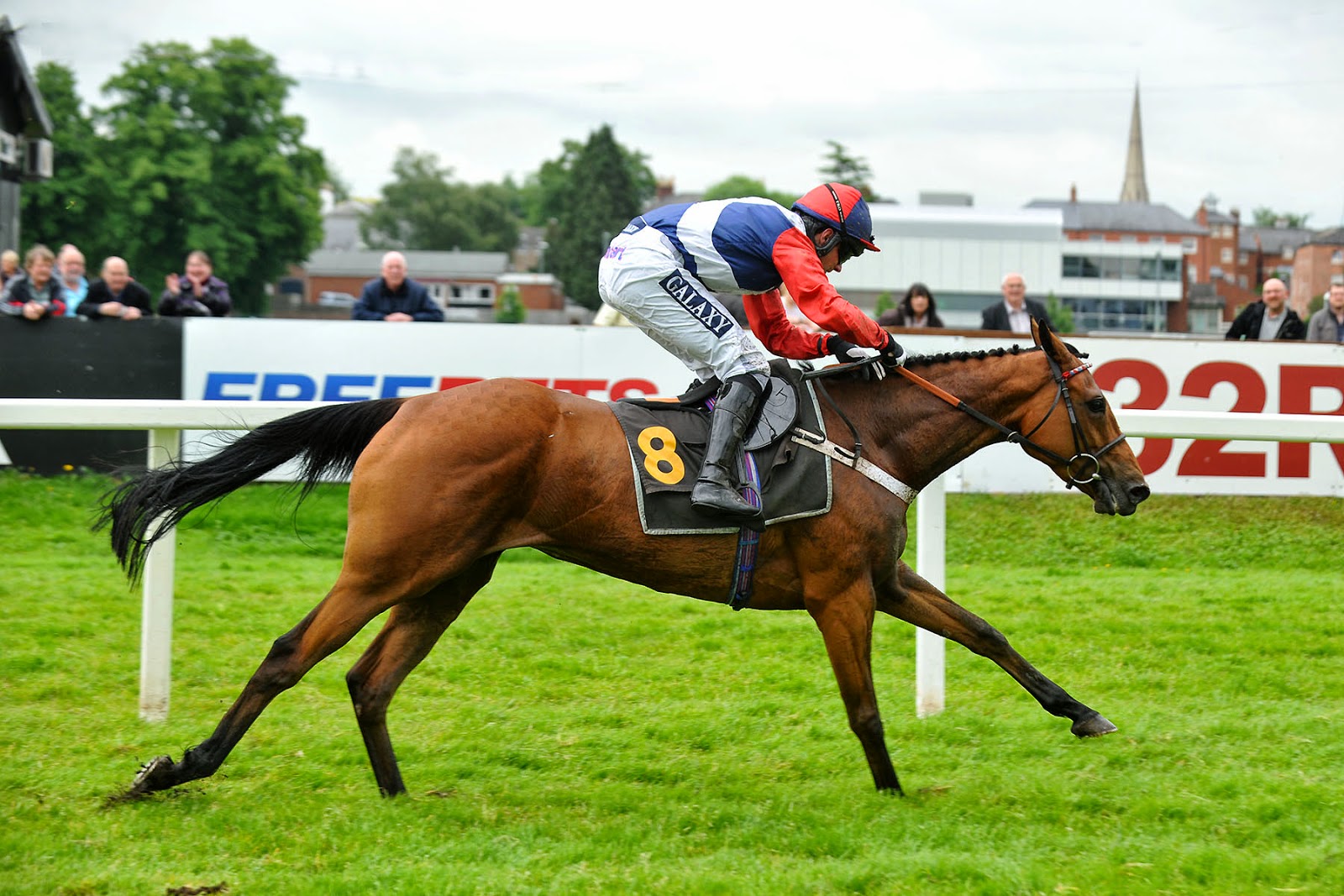 Leaderofthedance was bred by his owner, Tom Whitley who also raced the horse’s grand dam, Garrylough to victory 7 times in the 1990’s when trained by David Gandolfo.

Accompanying the Henderson runners was new assistant trainer, Patrick Harty, grandson of Grand National winning jockey, Eddie Harty and son of the Curragh based trainer of Captain Cee Bee of the same name.

Harty is following the footsteps of previous Henderson protégées such as Charlie Longsdon, Tom Symonds and Ben Pauling, and came also to Worcester last week to meet up with his Abberley based workplace mentor, Liz Juckes.

Juckes, daughter-in-law of ex Worcestershire trainer, Rod Juckes, was at the racecourse in her capacity as workplace co-ordinator for the in .  Juckes mentors 40 ex students of the including rising star Oisin Murphy, currently riding for Andrew Balding on the flat.

It is always good to hear of the success of Worcestershire trainers and Tony Carroll from Cropthorne certainly had something to celebrate recently.

Carroll has trained Ocean Legend since 2010 and at Brighton last week, the horse won the 100th race he has run in. It is rare, and therefore a great achievement to keep a horse sound for that number of races.

Ninety-four year old former Kinnersley trainer, Mercy Rimell had success in the week at Brightwell’s Horses in Training sales at . Super Sam went under the hammer to Herefordshire trainer, Venetia Williams for £31,000. The gelding is out of Gaye Sophie, also bred by Rimell, who is related to her 1983 Champion Hurdle winner, Gaye Brief.

Champion jockey, Tony McCoy has had a great start to the new season with 40 wins from 112 rides in May earning him an amazing strike rate of 37%. McCoy, who recently turned 40 appears in no mood to slow down and indeed following his rides at last week, left by helicopter for 3 further rides at the evening meeting at Wetherby in , one of which was a winning one.

Tomorrow sees the feature raceday of the season at Worcester. A large crowd is expected for Edwards Motors Ladies Day when the annual St Richard’s Hospice Valerie Lewis Memorial chase will be the main race of the day.


Due to the anticipated extra traffic, the gates open at 11.30am with the first race due off at 1.55pm.
Posted by Worcester Racecourse at 15:24