It’s very unfortunate to be in a position where you have to buy back a horse that you already own for as much as 13,000 guineas. Hopefully however, Pippa Gillard, owner of promising youngster, Byron Blue (pictured) feels that it was worthwhile to do just that. Byron Blue is a diminutive flat bred gelding by Dylan Thomas and he won a 2 mile 4 furlong selling hurdle at Worcester by 26 lengths at the end of July. Such was the interest in the horse following his impressive victory, that the owner had to go to 13,000 guineas to keep him in the subsequent auction. Tried back over our brush style hurdles over a longer distance of 2 miles and 7 furlongs last week, the horse made short work of the extra distance and won by 21 lengths with plenty in hand from former Worcester winner, Merrion Square, trained by Paul Nicholls. 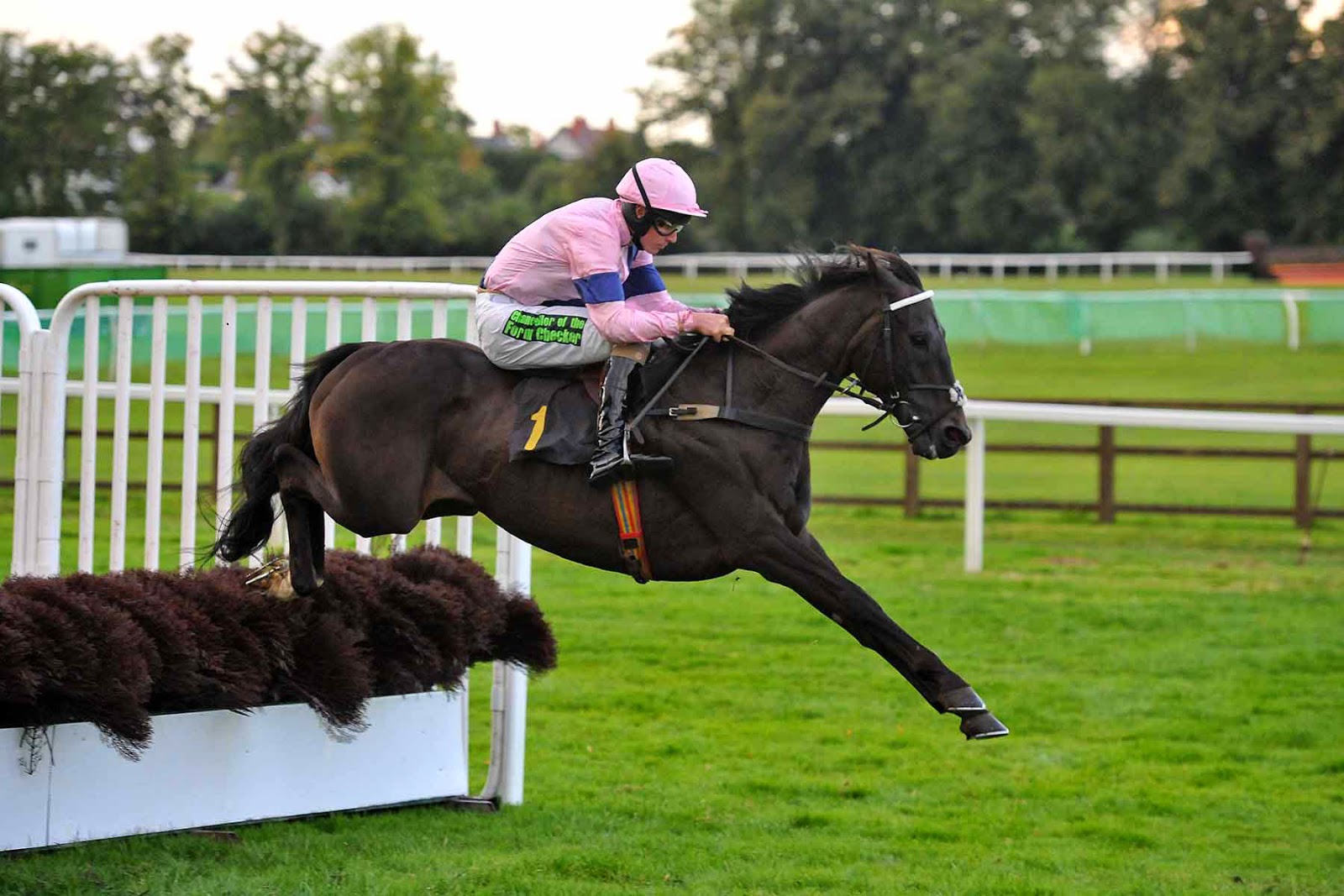 Alvechurch trainer, Ian Williams had his first success of the summer season at Worcester when Drumlang justified favouritism and beat Martin Keighley’s Kyles’s Faith, also a winner at Worcester back in May. Drumlang was giving plenty of weight away to the second horse and obviously relished the quick ground.

Another recent Pitchcroft success story at the end of July was Panache, who stormed to victory at a price of 100-1 under the female trainer/jockey partnership of Angela Clarke and Jodie Hughes. This was clearly no fluke as the horse continued his current run of good form by winning again at Ffos Las last week, this time returning a price of just 11-1.

Champion jockey, Tony McCoy has recently been chasing a further milestone in an attempt to beat his own record set in 2002 of the fastest 100 winners in a season.  It was touch and go as to whether he would achieve it at Pitchcroft last week, but despite 2 triumphs, it was at Newton Abbot on Thursday that this amazing feat was reached. Of those 100 wins, 18 have been at Worcester since May, during which period McCoy has also been placed second on 9 occasions.

There are signs that autumn is approaching. The evenings seem to be drawing in rapidly as the temperature drops. Some of the stars of the winter National Hunt season are progressing well in their training, having enjoyed the summer sun out in the field. We learnt in the week from Nicky Henderson that his stable stars Sprinter Sacre and Simonsig are doing well back in training, giving us a hint of things to come over the coming months.

Tomorrow is the last of the 9 evening meetings at Worcester this summer and the first race is due off at 4.35pm.
Posted by Worcester Racecourse at 09:30

What happens when you mix 19 times champion jockey, Tony McCoy with Prunella, the Pershore Plum Festival mascot, Queen Victoria, the Plum Princess plus her attendants and the Pershore town crier?  The result is a great night out at Worcester Racecourse!

The action on the track rewarded a good sized crowd, sportingly dressed in the colour purple, with a few interesting surprises. 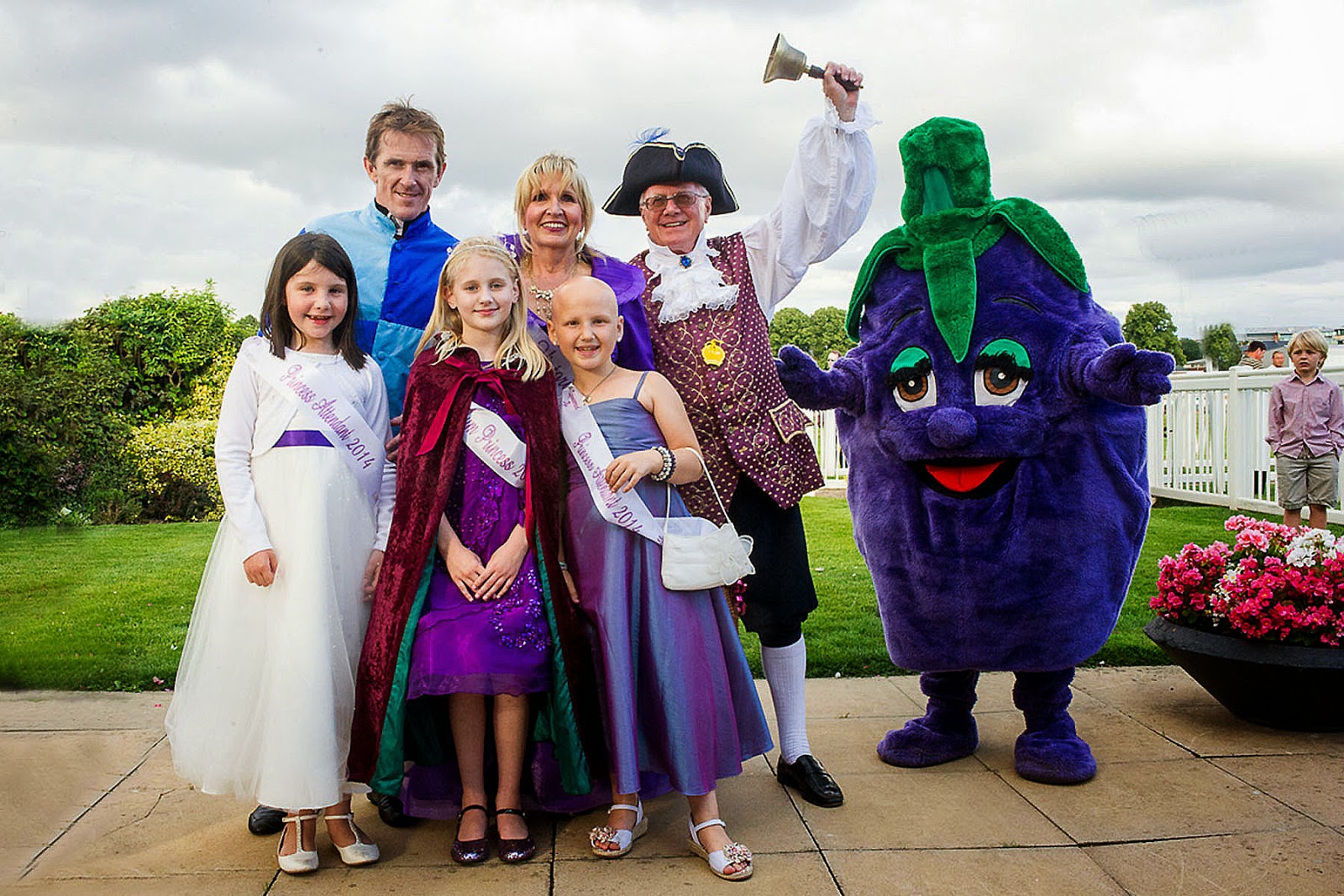 We are hard pressed to remember the last 100-1 winner at Worcester, but that is exactly what we witnessed when the only lady jockey of the night, Jodie Hughes, rode Panache to a memorable victory, giving Angela Clarke her first winner as a permit trainer. Beating the 11/10 favourite, Questioning, under McCoy, Panache has run 7 of his last 10 races at Worcester. The horse’s next race was a much tougher ask at Newton Abbot last week when he ran into 4th place in the novice hurdle.

Local success at the Plum Festival race night came from the Herefordshire yard of Venetia Williams who admitted it was the first time she had been racing since May. Monetary Fund made a winning debut over fences in the beginner’s chase and is now entered for our meeting tomorrow night.

Claines trainer, Richard Newland was on the score sheet at his local track with Discay under Sam Twiston-Davies. The horse looked anything but straight forward to ride, pulling hard and jumping awkwardly but he got the job done and will be better if he relaxes a bit more in his races.

Racing has witnessed a new beginning at nearby Wolverhampton Racecourse in the week when it became the first British course to race on a Tapeta surface. The track has been closed since April to allow the former Polytrack to be dug up and replaced with Tapeta. Reports from jockeys and trainers alike following the opening raceday were very positive and it promises to be a great asset to all-weather racing going forward.

August is traditionally the time of year for a short break in the National Hunt calendar. Leading into this period, there was a notable drop in field sizes with factors contributing to this including the quick ground and the quantity of race meetings. We were therefore pleased to see that 113 horses have been entered for tomorrow’s Ladies Evening and hopefully a good number of those will be declared to run. The vintage themed event is sponsored for the first time by local companies HallmarkHulme Solicitors and Startin Honda & Startin Skoda. As a final note, we would like to add that we are very pleased to see one of the most personable jockeys in the weighing room return to Worcester this week, following horrific injuries sustained at the Cheltenham Festival. Daryl Jacob, who broke a leg, knee and elbow, had his first ride back at Fontwell last week.

The first race tomorrow evening is due off at 5.10pm.
Posted by Worcester Racecourse at 12:54