I am pleased to report that the summer of racing at Pitchcroft is going from strength to strength.  Last week’s Severn Valley Railway Charitable Trust raceday not only raised an amazing £23,000 for the charity, but also welcomed a bumper crowd for a Wednesday afternoon to enjoy the first 8 race card of the season.  Eighty-three horses had been declared to run, well in excess of previous racedays this year.

The big story of the day, however belonged to ITV racing presenter Luke Harvey and his 6-year old Nicky Henderson trained gelding, Drumlynn.

Declared for the Conditional Jockeys & Amateur Rider’s National Hunt flat race, following 3 placed efforts in Irish point to points in 2016, Drumlynn had been off the track for 402 days. Described by Harvey in the winner’s enclosure afterwards as ‘green’, the horse ran well up the inner rail and saw off the challenges of Gordon Elliott’s Irish raider, Captiva Island, steered by top amateur jockey, Jamie Codd making his first visit to the course. 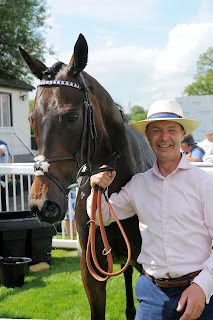 I am always interested in course ‘specialists’, particularly when they relate to Worcester. From time to time the success that often rather averagely rated horses have at one track stands out.  In short, the phrase ‘horses for courses’ springs to mind.

Jigsaw Financial, owned and trained by Laura Young is the perfect example.  Now 11 years old, he has been running at Worcester since September 2010.  I can’t think of many horses who have run here over quite so many years. From 7 career wins to date, 4 of those have been at Worcester. In July 2013, he won on 2 consecutive occasions in the month and latterly ridden by Sam Twiston-Davies, he was again successful at Pitchcroft last August. His victory last week came on the back of a 2nd place at our Ladies Day on June 3rd.  One to look out for when he next makes the trip from Somerset.

Another interesting fact emerged from last week’s raceday. In the Allelys General Haulage Claiming Hurdle 40% of the field left the racecourse heading for a different trainer’s yard from the one they ran for on the day.

Ten horses were declared for the race, the purpose of which being that all the horses were for sale.  The racecard listed the cost price of each of the 10 horses and following their performances, 5 were ‘claimed’.

The ever-popular Family Fun Raceday is on Sunday when aspiring little jockeys can enjoy complimentary pony rides and the first race is due off at 2.10pm.

Posted by Worcester Racecourse at 09:00

Ladies Day at Worcester Racecourse is so much more than just another raceday. The day seems to attract larger crowds each year, and the statistics tell us that many of these people only come racing once a year, representing on the whole, a different type of crowd to other racedays.

I think it’s also important to remember that the year on year numbers of people who dress in their finery and come out to enjoy themselves, not only support the Racecourse’s biggest day but also many of the local restaurants, bars, shops, hotels, car parks and indeed other attractions in Worcester over the weekend. Nor must the generosity of the many racegoers who contributed to the incredible £25,000 raised for St Richard’s Hospice on Ladies Day, go unmentioned.

On a day when 2,000 spears of locally grown asparagus were consumed, 100kg of seafood was prepared, 1,000 scones and 1,500 pies were enjoyed, the racing highlight was undoubtedly the victory of Her Majesty the Queen’s homebred, Take to Heart in the concluding maiden hurdle. 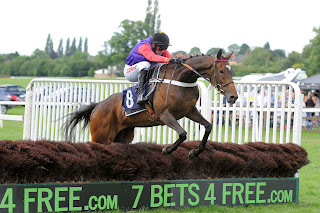 The gelding by Sakhee who has previously been placed in all his 6 races bar one, led for much of the race and won by a clear 15 length margin under Nico de Boinville.  The race was a qualifier for our summer 7bets4free.com Fixed Brush Hurdle Series, giving Take to Heart automatic eligibility for the £25,000 final in October.

You have to look back to 2014 to find the Queen’s last runner at Worcester. Also bred by Her Majesty and trained by Nicky Henderson, Special Agent won a bumper at the course on Ladies Day in June that year, similarly coinciding with Derby Day.

On that occasion, when I sent the photograph of Special Agent to the Queen, as I do for all our winning owners, I received communication back thanking me and saying that Her Majesty had enjoyed watching the race from the Royal Box at Epsom.

By contrast, the £9,000 Sparkling Anja Potze Fine Jewellery handicap hurdle was won by permit trainer and owner, Rosemary Gasson from Banbury with Mr McGuiness who was 2lb out of the weights. The decent quality field featured three previous course winners, including Slim Pickens trained locally in Claines by Richard Newland.

Horse power meets steam power at the races tomorrow afternoon, when we stage the annual Severn Valley Railway Charitable Trust raceday.  The two racedays held in aid of the Trust in 2015 and 2016 have raised between them, an amazing £45,000 which has gone towards the restoration of historically important trains and carriages, building new facilities and funding the Heritage Skills Training Academy, helping to ensure the Severn Valley Railway will be here for future generations to enjoy.  It never ceases to amaze me just how generous people are and how much a raceday can help to raise for a wide variety of very worthy local charities.

The first race is due off tomorrow at 2.20pm.
Posted by Worcester Racecourse at 09:00

Come rain and shine, great racing is always on the card at Worcester

You have to be careful what you wish for.  One week we are subjected to a deluge of rain on the raceday, resulting in just shy of an inch of water soaking into the track. The following week’s meeting is an uncomfortable scorcher, the hottest day of the year so far.

Our first Gent’s race evening proved a popular event, with plenty of local support and people flocking to the track for the start of the Bank Holiday weekend.

There were beaming smiles from amateur jockey, Sam Jukes who rode his first winner under rules in the opening Hargreave Hale Investment Managers hunter’s chase.

Winning pointer with the Ledbury Hunt, ten year-old Rye Cross put in a much improved performance on his recent Cheltenham run to see off the challenges of the favourite, Master Sunrise, trained by Diana Ralph in Malvern.

The Ralph family had plenty to celebrate later in the evening, however.  Diana’s son Alastair, who trains at Billingsley near Bridgenorth in Shropshire, posted a double on the card.

Former amateur jockey on the point to point circuit, Ralph began his racing career working for Michael Scudamore.  He went on to join Paul Nicholls’ yard at Ditcheat before furthering his experience with a stint for Dr Richard Newland in Claines.

Whilst maintaining his yard of successful pointers, Ralph advanced his career as Henry Daly’s assistant trainer for 5 seasons.  In 2015 he took out his own training licence and the yard is currently going from strength to strength.  Of his 9 Worcester runners to date, 4 have been winners.

Employing the services of Richard Johnson, who rode a treble on the card, Ralph’s first victory of the evening was with 11/4 favourite Gustave Mahler in the national hunt novice hurdle, a qualifying race for the 7bets4free Fixed Brush Hurdle Series final at Worcester in October. Gustave Mahler is a course and distance winner, having scored in the bumper exactly a year ago on Ladies Day.

It’s Oscar was Ralph’s second success of the night in the 2 mile 7 furlong handicap hurdle, having last run at Pitchcroft in July 2013, coming home in 4th place under Jason Maguire. 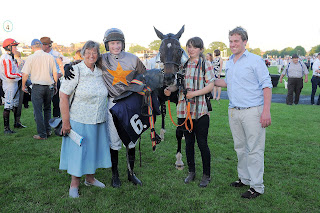 It was particularly pleasing to see It’s Oscar’s owner, Sue Troughton in the Worcester winner’s enclosure as she is a great supporter of the course and rarely misses a meeting.

Martin Keighley had not had a winner at Worcester for 705 days and 34 runners, so it was thrilling to see his 13 times maiden runner, Viking Mistress eased on the run-in under Richard Johnson to record an 11 length success for the many happy members of the Martin Keighley Racing Club who had come along to support her.

Tomorrow’s meeting at Worcester is the annual Ladies Day fixture and a large crowd is expected.  The first race is due off at 1.45pm with gates opening at 11.30am.
Posted by Worcester Racecourse at 16:25