Despite the short break in the National Hunt calendar to allow the jockeys time away with their families, it has been anything but quiet at Pitchcroft over the last 3 weeks.

In addition to hosting the annual CAMRA beer festival, the days have been well spent working the racing surface and checking over the chase fences following a quick succession of 12 race meetings in just 3 months.  This brief rest for the track will see it in good stead for the next 8 meetings, two of which fall in this week.

This is an excellent stage in the season to review the Connellys Red Mills trainer’s championship, looking back over the success stories that have led to the current table positions.  Three trainers stand out from the rest.  Last year’s winner, Jonjo O’Neill is again leading the way by some 46 points, followed by Tim Vaughan and John Ferguson who, with just 2 points between them, are running neck and neck as contenders for the runner up position. Flying the flag for Worcestershire trainers is Claines based Richard Newland who is lying in 6th position.

O’Neill started more slowly this year, as the yard adjusted to the retirement of champion jockey Tony McCoy in April, but with both Richard Johnson and Will Kennedy taking many of the Jackdaws Castle rides now, the winning momentum is gathering pace and the trainer achieved an amazing 1,125 – 1 four-timer on one Worcester card in July, with his only four runners that day. 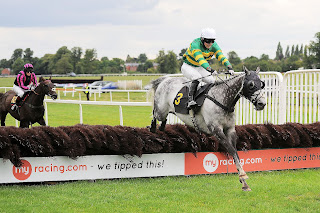 Unable to be present due to a wedding commitment in Ireland, O’Neill missed watching his son, Jonjo Jnr ride his first winner under rules when he successfully drove yard favourite, Temple Lord, a previous Worcester winner, to victory in the concluding Amateur rider’s handicap hurdle.

As we progress through the second half of the season, it will be fascinating to monitor the tussle for the top honours and to see who is awarded the Connolly’s Red Mills feed prizes.

Royal visitors are rare are the Racecourse, but the recent Pershore Plum Festival racegoers were treated to a glimpse in the paddock of the Duchess of Cornwall who arrived at the course on a private visit to watch her mare, Mollyanna run in the Pickled Plum Pub Pershore national hunt novices hurdle.  This is the Duchess’s first National Hunt runner with trainer, Jamie Snowden and it was the mare’s first outing since coming over from Colin Bowe’s yard in Ireland.   She ran well for a good way but faded into fifth place up the home straight and will undoubtedly come on for the run. 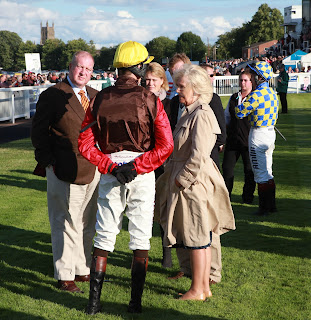 Racing in earnest begins again at Pitchcroft tomorrow evening with vintage style Ladies Evening, featuring James in concert, and for the younger racegoers, Family Fun raceday on Sunday offers plenty of entertainment to enjoy, both on and off the track. Gates open at 3pm for tomorrow’s meeting.
Posted by Worcester Racecourse at 18:11