The Irish weather the storm on a wet Wednesday

Come rain or shine, the racing show must go on! The 67 horses were declared to run for last week’s meeting on ground described as Good to Firm, Good in Places ground. Following 18mm of persistent rain between 7.30am and 5.30pm on raceday, the ground went through 3 ‘going’ changes and ended up as officially ‘Soft’ according to the Clerk of the Course and the jockeys alike.

As would be expected with such a swing of conditions, there were some non-runners, however the soggy weather did not dampen the quality of the racing or the thrill of the finishes.  Five of the 7 winning distances were recorded as less than 2 ¼ lengths.

The day really belonged to Noel Fehily who rode a treble, including a double for trainer, Harry Fry.
Fehily is a master of his craft especially on the younger, more inexperienced horses, expertly educating them in the early stages of their racing careers. All three of his winning races were for horses at the grass roots end of the sport, a bumper, a novice and a maiden hurdle.

The first of Fehily’s wins was the race of the day for me.  With a keen interest in national hunt breeding, mares’ bumpers always catch my eye.

The 9/4 favourite for the race, purchased last year for £75,000 was the 6 year-old King’s Theatre mare, Annie Angel trained by Amanda Perrett.  Her only previous form was an Irish maiden point to point win on her debut last December.

Expected to win the race, Annie Angel came up against the sole Irish trained raider at the meeting, A Three Eighty who is named after an aircraft. A strapping 17hh filly, A Three Eighty made a solid start to her future in a Fairyhouse bumper in April. 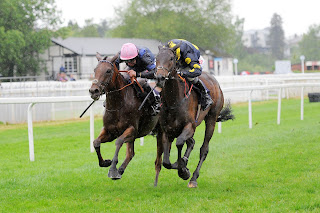 The two horses pulled 13 lengths clear of the opposition and battled in impressive style all the way to the line.  The 20/1 shot, A Three Eighty just managed to put her nose in front and snatched victory by a short head.

A Three Eighty is trained in County Tipperary by Tom Hogan, who interestingly, is famed for training Gordon Lord Byron, bought as a foal for just 2,000 Euros in 2008, to win over $1.8 million in prize money in flat races all over the world.

Even more astonishing in the light of this, is the fact that Gordon Lord Byron fractured his pelvis as a 2 year-old leaving the stalls on his debut run at Roscommon in 2010.

Determined to save him, Hogan filled his stable with car tyres to prevent him from lying down and straining the injury trying to get up, which almost certainly would have proved fatal.  He remained standing for 4 months.

The following year, he posted his first win at Dundalk followed by international success in Australia, Hong Kong and France, as well as Britain and Ireland.

Evening racing at Pitchcroft opens tomorrow night with the annual Hargreave Hale Investment Managers Hunters Chase, due off at 5.50pm.

Posted by Worcester Racecourse at 21:50

The future of our sport depends, like most sports, on securing the engagement of the younger generation. There are a number of initiatives in racing to entice the young to get involved, from accompanied under 18’s being admitted free, to student discounts.

The support from the Worcester University students at Pitchcroft last week was extremely encouraging to see and we hope that some will venture down again, hopefully sparking an interest in racing that could well span many years.

The Worcester leading trainer contest of 2016 was a very close run thing, concluding on the final day of the season when Neil Mulholland just pipped Phillip Hobbs and Dan Skelton by a mere couple of points to take the title.

The 2017 trainer competition has started competitively, with both Jonjo O’Neill and Dan Skelton hitting the ground running with 3 winners and 2 seconds between them. 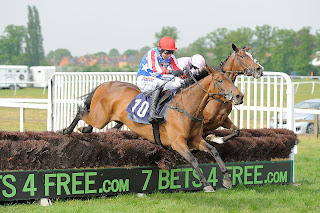 The race was the first qualifyer in the new series which culminates in a £25,000 final at Worcester in October, at which Skelton confirmed there was every possibility his mare would be aimed.  Whatzdjazz, who won her first outing in a Fakenham bumper in February found plenty on the run in to see off the challenges of Jonjo O’Neill’s 6/4 favourite, Big Penny, a £70,000 purchase last year as a 4-year old.

Skelton’s other winner on the card was Cobra De Mai, coming to Worcester off the back of his chasing debut win at Warwick 11 days previously.

Cobra De Mai is by Great Pretender, an increasingly popular sire and only one of two stallions by the legendary Kings Theatre available to national hunt breeders.

Alan Phillips, a local trainer based at Callow End, was delighted that his first runner of the new season was a winner at his nearby track. Lined With Silver was partnered to victory by popular weighing room joker and champion jockey in Jersey for the past 4 years, Mattie Batchelor.

Phillips rode 87 winners between 1993 and 2003 in point to points, hunter chases and novice chases, and took up training pointers in 2004.  In 2013, he took out a dual-purpose licence and now runs a small string of national hunt as well as flat horses.

We stage less ‘selling’ races than we used to these days.  Having said that, the race on last week’s card saw winning mare, Lakeshore Lady, in the Giant Bolster colours of Simon Hunt, auctioned after the race and bought by trainer Sheila Lewis from Brecon, for 4,400 guineas.

There was no success at the opening meeting for last season’s Worcester leading jockey, Richard Johnson, who was presented with a framed picture of one of his 2016 victories.  I am however certain that he will be on the score sheet in defence of his title very soon.

The gates open for racing at Pitchcroft tomorrow at 12 noon.

Posted by Worcester Racecourse at 16:26

Racing is back for 2017 at Worcester Racecourse

We are delighted to be welcoming owners, trainers and jockeys, our annual members and racegoers back to Pitchcroft tomorrow for the start of what promises to be another action packed, National Hunt racing season.

We are also looking forward to welcoming students from Worcester University for our inaugural Student’s Day.

The course has wintered well, having been blessed with a flood free spell. The turf has flourished and the staff have been able to concentrate on what we do best – preparing for the season ahead.

In March, the Worcester annual Members were invited to David Dennis’s yard at Hanley Swan.  We were warmly welcomed by David, his wife Kate and the yard’s Racing Club manager, Martin Higgs. The members turned out in force and enjoyed watching horses working firstly on the round gallop, followed by exercise in the equine pool. A tour of the highly impressive, new 50 stable block was next on the agenda, and refreshments rounded off a fascinating and enjoyable morning. Worcester is Dennis’s closest course and we look forward to seeing some of the horses we met run at Pitchcroft over the coming months.

We are excited to be announcing a new hurdle series that will be run over the summer at Worcester, in conjunction with our racecourse at Southwell. Generously sponsored by Malvern based 7bets4free.com, the Fixed Brush Hurdle Series comprises 42 races, 28 qualifyers at Worcester and 13 at Southwell, culminating in a £25,000 final at Worcester on 25th October.

The races will be a combination of juvenile, maiden and novice hurdles and the intention is to support horses at the grass roots of the sport.  Horses finishing in the first 8 of the qualifying races will be eligible for the final.

At the start of the season the thought always crosses my mind as to which horse or horses will find Worcester a springboard to the bigger National Hunt stage later in the year.  Recently, Ballyandy was a case in point, and the horse I shall remember from last season is Paul Nicholls’ San Benedeto. 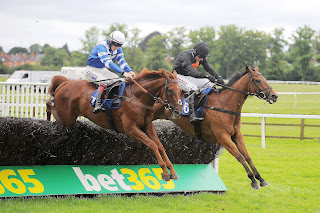 The horse won a 2m 4f, class 4 novice chase at Pitchcroft last June as a 5 year old. Finding his preferred 2 mile trip, he has progressed ever since culminating in a grade 1 novice chase victory at the Grand National meeting at Aintree in April.

Most recently, he came a very respectable third behind this year’s Cheltenham Festival Arkle winner, Altior and the Queen Mother Champion Chase winner, Special Tiara at the concluding 2016/2017 jumps season meeting at Sandown.  He was beaten by just 12 and a half lengths.  San Benedeto’s prize money earnings now total an impressive £213,000 and his rating has gone up from 144 when he ran at Worcester last summer, to 163.

At six day stage, there were 145 entries for tomorrow’s meeting.  As the gates open at 12.15pm and we welcome racegoers for what will be my 17th season at the racecourse, I wonder which horse will go on to be the ‘San Benedeto’ of this year?

Posted by Worcester Racecourse at 21:12