#WorcesterForm at the Grand National Festival

Following on from our popular blog looking at the Worcester form at the Cheltenham Festival, we look at the runners from Aintree that have taken a spin around Pitchcroft.

In previous years we have been blessed with Worcester Form to follow around the over 4 mile feature race at Aintree, this year we are not so lucky. Sat 20th in the weights is Double Ross, a faller when favourite on his only Worcester appearance, and a general 80/1 chance for tomorrow's big race. After a disappointing season and at 10 years old, great hope isn't held for the Nigel Twiston-Davies trained horse.

Fortunately however the other Worcester Form horse isn't completely out of the reckoning, and is a previous Worcester winner. THE ROMFORD PELE won a Class 3 (pictured below) on Ladies Day in June at Pitchcroft in 2014. Then officially rated 124 and just 7 years old, he kicked on to win his next two races, both at distances of over 3 miles, both on ground that was good. Rated 145, the now 9 year old has just crept in to the race, bottom of the weights, a mere pound above the fancied Bishops Road. As short in places as 33/1, but generally a 40/1 shot, the bookmakers suggest he holds each way claims in the 40 strong field, carrying just 10 stone 4 pounds!

The Romford Pele makes his first trip to Aintree tomorrow and has been previously seen on his past four occasions at Cheltenham. All six victories have come at different courses with five different jockeys on board, succeeding over 3 and a quarter miles at furthest. Far from disgraced on his furthest distance race, finishing 7th of 17 over nearly 3 and a half miles, just 6 lengths behind the winner, beating home 2016 Grand National runners; Soll, Just A Par, Black Thunder and Le Reve. The ground that day was Good to Soft and should The Romford Pele run his best race he looks to need it Good to Soft, and not Soft, as it currently is as of Friday afternoon. Let's hope the ground dries up and The Romford Pele runs into a place, or better, for Trevor Whelan & Rebecca Curtis! 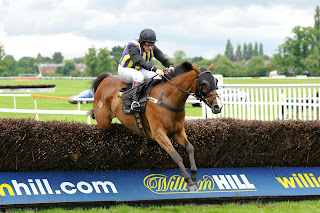 A number of former Worcester winners make the line-ups in the racing on day 2 from Aintree, Astracad, Village Vic, Henri Parry Morgan, amongst others. However the standout Pitchcroft form to watch on day 2 is in the 5.15, and is top weight, some 4 pounds above the field, Ballyandy.

Ballyandy is re-opposing Battleford, who has rightly been made favourite for the race this afternoon at 5.15pm. It looks likely to be another close run thing with the Worcester team all behind the 'Product of Pitchcroft'. 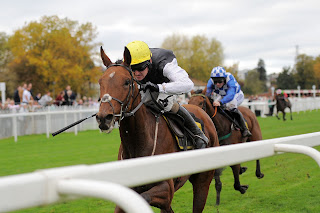 Not a good day for following the Worcester Form, with all but one failing to grab a place. That place came from Dineur, who nabbed a second in the Fox Hunters. However the French gelding was not nearly that impressive around Worcester, when coming 6th of 8, despite going off favourite, back in May 2013.

Interestingly, much of the Worcester form appears in the feature race on day 1 of The Grand National Festival. The Betfred Bowl Chase, a Grade 1 affair, includes three runners with form from the heart of Worcestershire.

Fulfilling the lower end of the betting market, but not without a chance; Dynaste, Houblon Des Obeaux and Irish Cavalier fly the Worcester flag, holding current ante-post odds of 33/1, 33/1 & 20/1 respectively. After finishing fifth, just a nose behind fourth, in the Cheltenham Gold Cup, Irish Cavalier looks a horse on the up at just 7 years old, seemingly improving given the extra distance. Should Cue Card jump the course, with Djakadam and Don Poli putting in similar efforts to that in the Gold Cup it is difficult to see Irish Cavalier getting into the reckoning but there may well be more from the Rebecca Curtis trained horse. 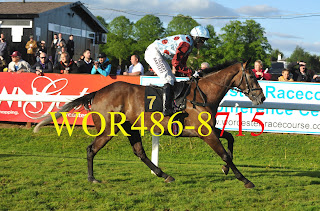 Irish Cavalier won his maiden at Worcester back in May 2013, eight months after Houblon Des Obeaux won his debut chase race at Pitchcroft. Often able to spring a surprise, the Venetia Williams trained Houblon Des Obeaux won last time out and had a previous solid season of placed efforts. Victory possibly beyond him, like Dynaste, but each way chances possible.

Through the rest of the day at Aintree there are 6 further previous Worcester runners, two of which have a Worcester win to their name, both featuring in the same race. Lining up in the Grade 3 Red Rum Chase is perennial Worcester runner, Surf & Turf, who boasts 3 wins and 2 places from 7 runs at Pitchcroft, whilst Pearls Legend has three quickfire runs under his belt at Worcester in 2012, picking up a first, a second and a third.

Posted by Worcester Racecourse at 12:01