Another four timer for McCoy at Pitchcroft

For the second time in as many months, AP McCoy rode a four timer at Worcester last week. His strike rate for the month of August was a phenomenal 40% and September is promising to be equally impressive, if not better. The 4 wins included a double on the day for trainer John Ferguson and owners, Bloomfields. The first of their two successes came aboard El Namoose in the bumper. The 5 year old flat bred, by Authorized, tasted victory at Musselburgh in January and went on to run in the Champion Bumper at the Cheltenham Festival in March where he put in a creditable performance but was reluctant to settle. McCoy gave him good cover in the Worcester race and he won easily, coasting home on the bridle.  He could be an exciting prospect going forward. McCoy also steered home locally trained Marju’s Quest to win the Westlands Worcester sponsored handicap hurdle.  The improving 4 year old who has won twice at Fontwell in recent weeks, comes from David Dennis’ yard at Hanley Swan.

Another local trainer enjoying a purple patch is Ian Williams, based at Alvechurch. Williams enjoyed a double at Plumpton on Sunday, both in the hands of Richard Johnson. Cool Sky followed up his recent Worcester win to beat Nicky Henderson’s Springinherstep by 3 lengths in the handicap hurdle, and Teak followed up for the trainer in the next race. Teak is a good example of the versatility of Williams’ string. The horse had been down to run in the Cesarewitch trial at Newmarket the day before, having won 3 times on the flat this year, but was a non-runner after the rain changed the going.

Most trainers are hosting seasonal open days to parade their winter prospects currently, with both David Dennis and Ian Williams opening their doors in the last couple of weeks. The dry forecast for the next month will undoubtedly have an effect on how soon we see the stars of the winter season have their first runs back on the racecourses, and will for the time being keep the field sizes relatively small due to the quick going.

There are interesting stats in the British Jumps Owner’s Championship table this week.  The first 5 owners in order, read Mr John P McManus, Bloomfields, Paul & Clare Rooney, Mr RER Williams and Favourite’s racing (owners of Marju’s Quest). Three out of the five names listed against these owners as their horse with the most win and prize money have won at Worcester this summer and one came second, including at the top of the list, JP McManus’s horse, It’s a Gimme.

The racecourse, in conjunction with Boots, are raising funds for Macmillan Cancer Support during our meeting tomorrow, with a coffee morning prior to racing starting at 11am.
Posted by Worcester Racecourse at 18:10

Grand National winner, Pineau De Re’s summer holidays have come to an end and he has recently embarked on the long road back to Aintree, starting with plenty of roadwork to build his fitness. The main season target of the 2015 Grand National is 7 months away.

The local hero’s Claines trainer, Richard Newland is enjoying a great run of form in 2014 with his small string. On a recent Fontwell card, where Worcestershire trainers Newland and David Dennis were responsible for 3 winners out of the 7, both Gran Maestro and Vosne Romanee were seen to good effect for Newland. Following a short break in the National Hunt calendar, Gran Maestro has been declared at Worcester for today’s twilight card.

Last week’s meeting at Pitchcroft saw another success for owners Paul and Clare Rooney. Four year old duel French winner, Kitchapoly gave Tony McCoy the second leg of his treble on the day and is just one of 56 horses that the Rooney’s have in training with Grand National winning trainer, Donald McCain. The Rooney’s current string totals 70 horses, with 6 jumpers trained at Bourton on the Water by Nicky Henderson’s former assistant, Ben Pauling, and a further 8 horses running on the flat. 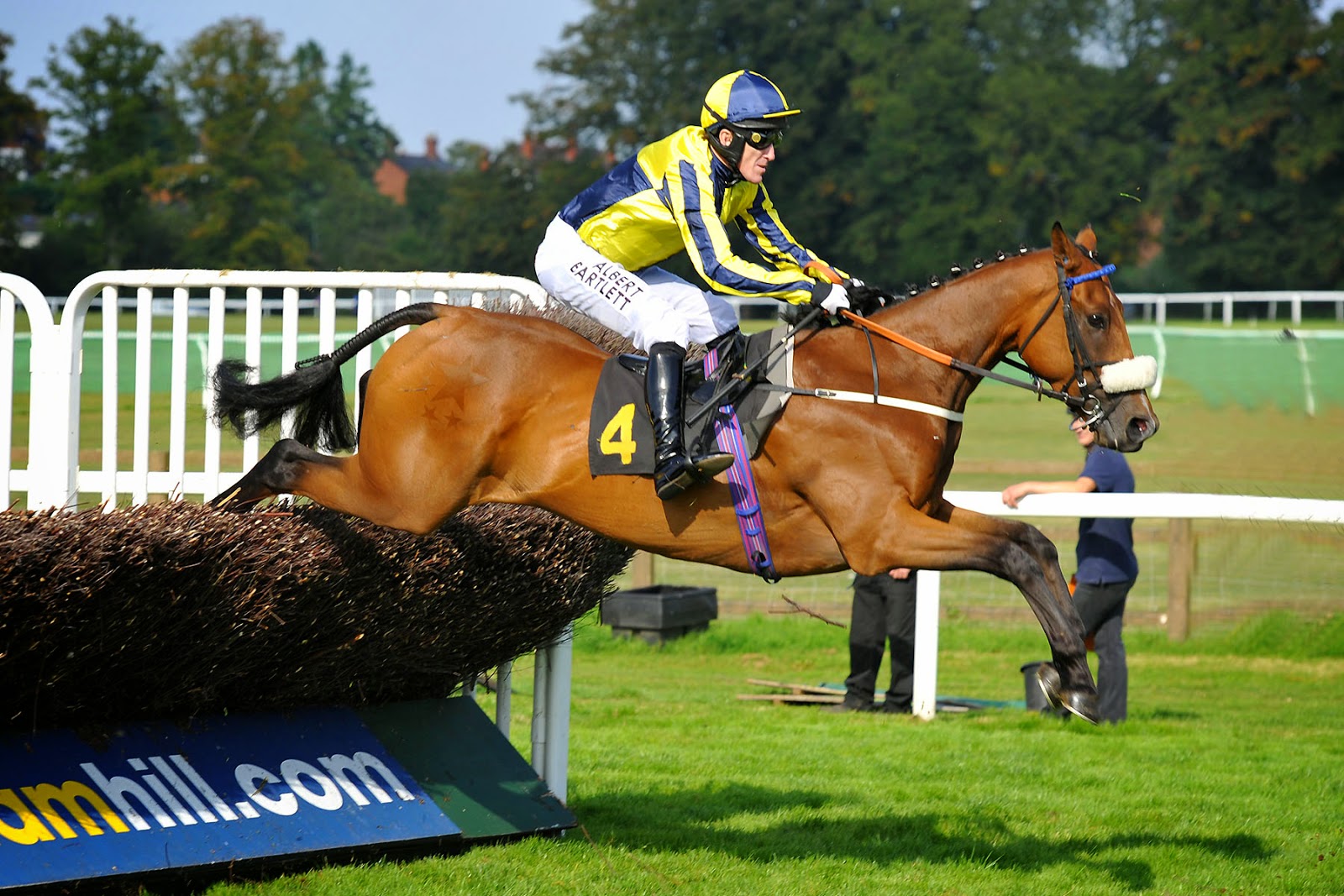 Desert Orchid’s jockey, Colin Brown who won 17 races from 42 rides aboard the popular grey was on hand at Worcester to present a trophy to the owners of Accessallareas.  The horse won the opening race, run to promote what promises to be a highly entertaining charity dinner in the Grandstand after racing on the 9th October, jointly in aid of St Richard’s Hospice and the Injured Jockey’s fund.

Alvechurch trainer, Ian Williams has recently succeeded in his ambition to saddle a winner at every course in Great Britain. The final track Williams needed to conquer was Thirsk in North Yorkshire, where Cruise To The Limit managed to get his nose in front.  The trainer puts his success down to being ideally located in the Midlands and the diversity of the horses he trains.

We would also like to congratulate Worcester’s Senior Veterinary Surgeon, Andrew Harrison, a partner at the Three Counties Equine Hospital near Tewkesbury.  Harrison, who is one of the 4 vets employed to oversee the veterinary care at every Worcester meeting, has just been appointed as President of BEVA, the British Equine Veterinary Association.

The first race today is due off at 3.50pm.
Posted by Worcester Racecourse at 10:10

If owning a racehorse is your dream, and as for most of us, there is a strict budget, you could do a lot worse than joining a syndicate like the Foxtrot NH Racing Partnership VIII who own Discay, trained at Claines by Richard Newland.

Syndicate ownership often means the horse is leased from the trainer so there is no initial financial outlay required to purchase the horse. An agreed monthly amount is then payable for a fixed term to cover costs including stable fees, farrier, vets, travel to the races, jockey’s riding fees etc. The more members, the lower the monthly cost.

When Discay (pictured below) won at Worcester for the second time in a month last week, we poured over 50 glasses of champagne for the celebrating winning syndicate owners and it was good to see so many happy people sharing in the experience of successful ownership. Most trainers and indeed some racecourses, have opportunities for syndicate owners and it is a route that is well worth exploring if you are interested in getting involved in this aspect of the sport. 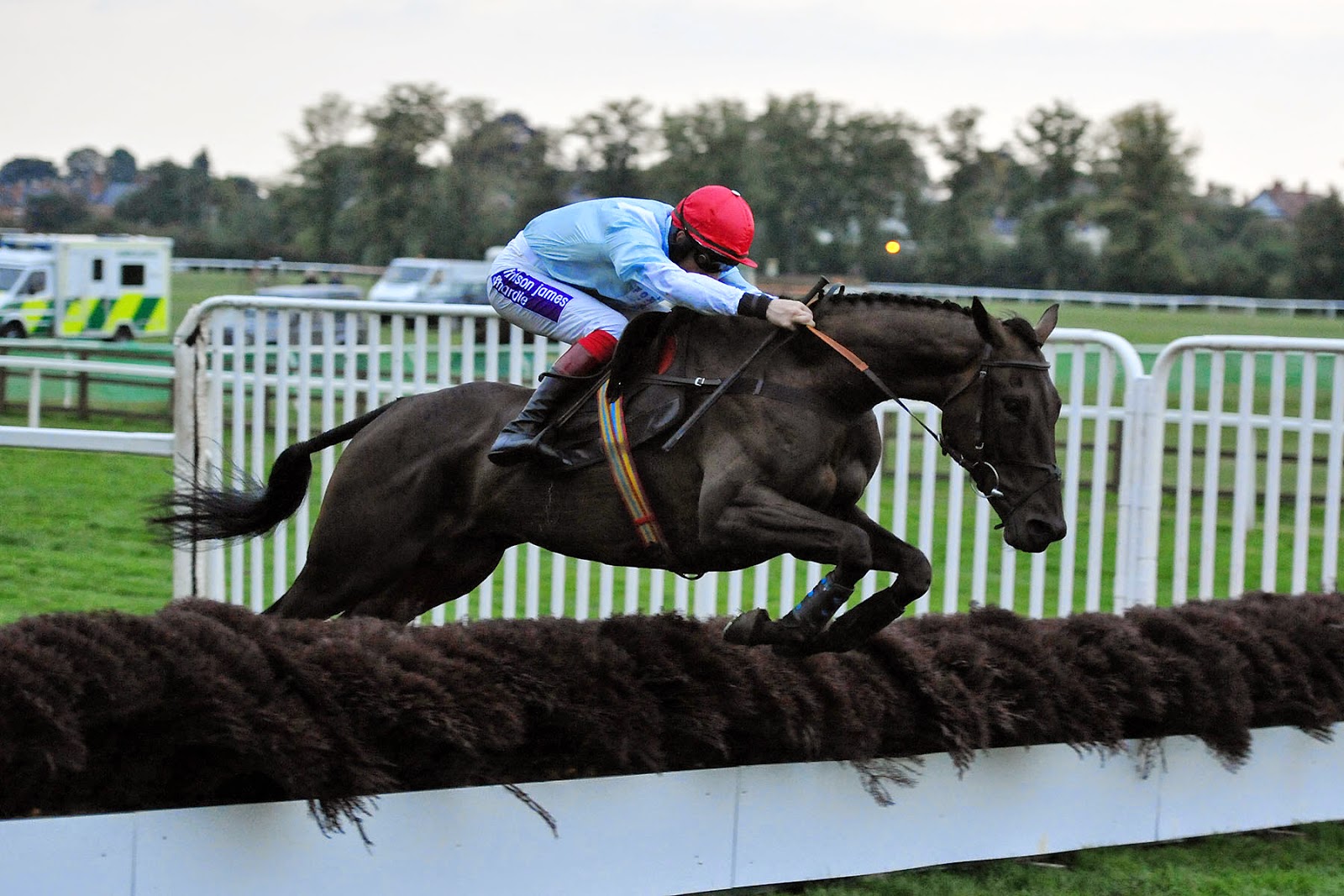 A horse with an interesting background caught our eye in the Pitchcroft winner’s enclosure at the same meeting as Discay’s victory. Macarthur, trained in Pembrokeshire by David Rees travelled strongly to win the Class 5 claiming hurdle under a tactical ride by Paul Moloney. The 10 year old’s last win came on the 21st June, 2008 in the Group 2 Hardwicke Stakes at Royal Ascot under the trainer/jockey expertise of Aiden O’Brien and Johnny Murtagh. In May and June of that year, his purple patch also included victory in the Group 3 Ormonde Stakes at Chester and third place in the Coronation Cup at Epsom, behind Soldier of Fortune. To date he has won £202,729 in prize money.

Bumper winner at our last meeting, Dancing Meadows is a horse to watch if she takes up her intended place in the listed mare’s bumper at the Cheltenham Open meeting in November. The filly went through the Doncaster sales ring last week and was snapped up for £38,000 to stay in the yard of trainer, Gordon Elliott.

We all run out of superlatives to describe the amazing achievements of Tony McCoy.  The ‘McCoy factor’ has a very positive effect on attendance figures as well as luck with the bookies wherever he rides. Thanks to a hat-trick of wins last week, his latest milestone is to have ridden 100 winners in just 5 years at Worcester. McCoy’s form figures for the most recent two meetings alone at Worcester read a staggering 1131313F11165. Derek Thompson was on hand on Sunday's meeting to get a few words from McCoy after this magnificent achievement, McCoy's aim, as ever, was "to stay off the ground". 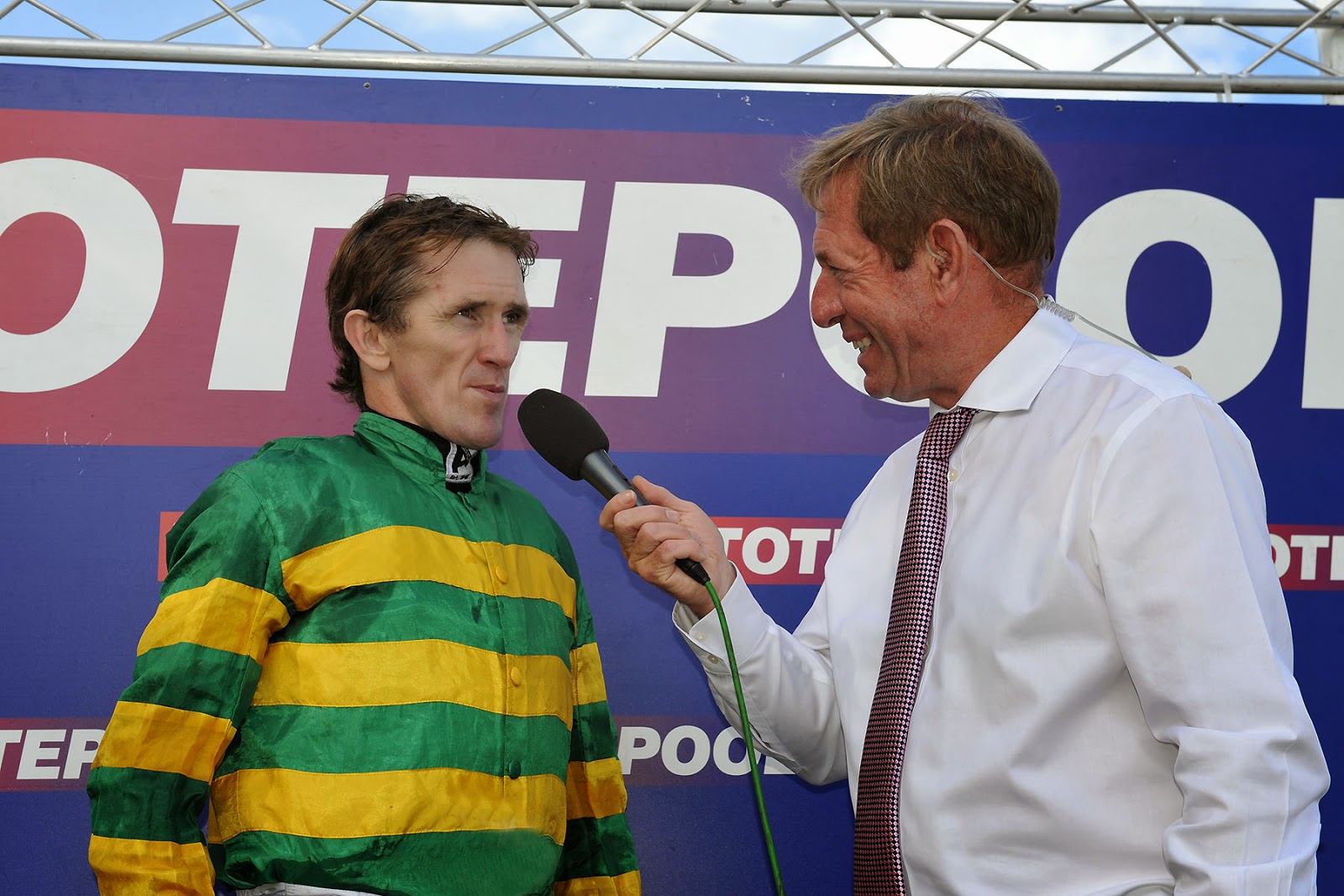 Worcester Racecourse has recently staged its share of the Ice Bucket Challenges currently sweeping the country in aid of Motor Neurone disease, with jockeys Sam Twiston-Davies, Will Kennedy and Andrew Thornton all enjoying a public soaking in the name of charity. 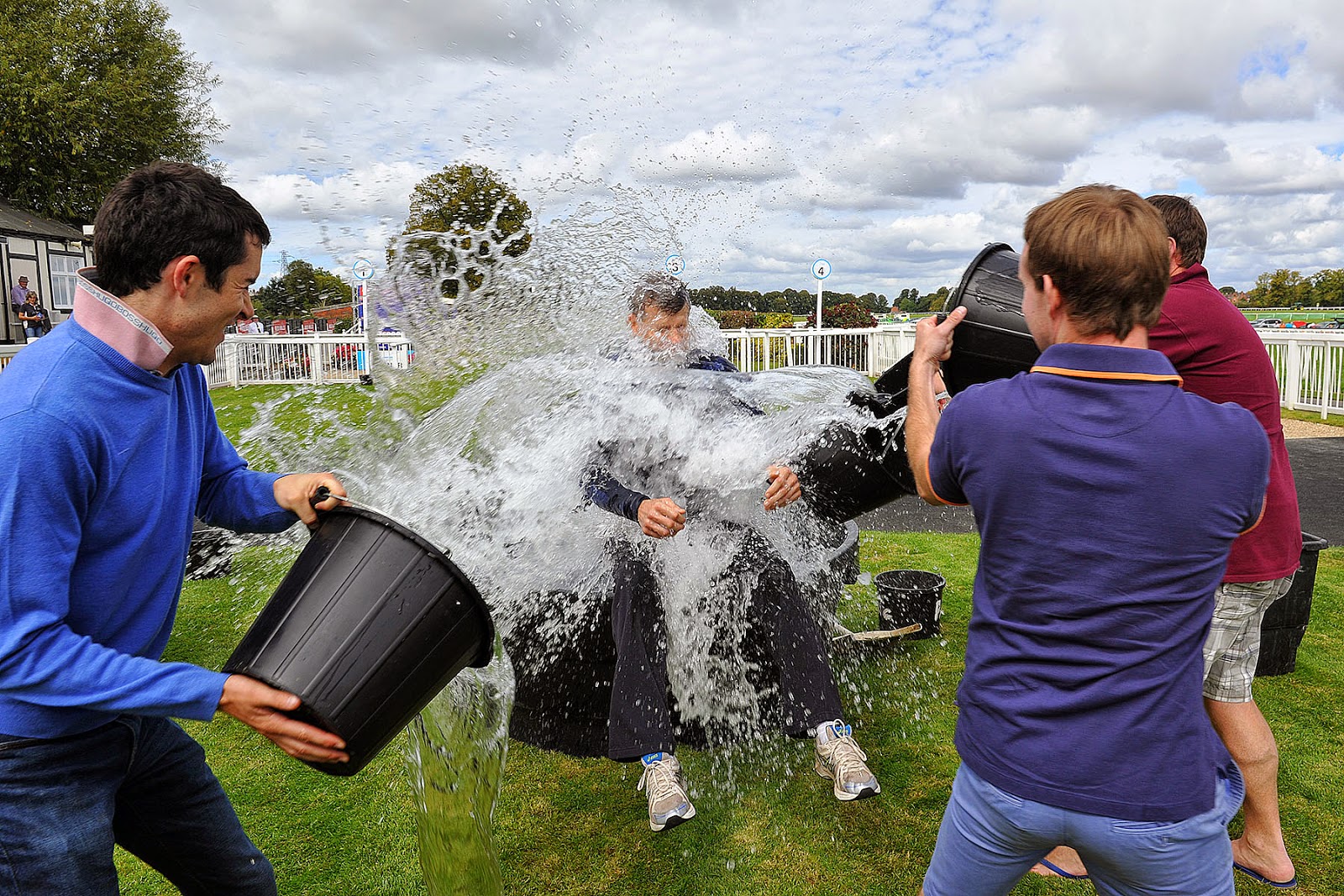 Gates open at 12.10pm for racing at Pitchcroft tomorrow afternoon. First race off at 2.10pm, A.P McCoy has five rides to enhance his already impressive Worcester record.
Posted by Worcester Racecourse at 20:19