Pitchcroft has seen plenty of racing action recently with 3 meetings in just 10 days.

The weather did its best to spoil the party on last week’s family fun raceday, but the annual mascot race in aid of the Children’s Trust to raise funds for children with brain injuries brought a ray of sunshine to an otherwise wet day.

Nine mascots representing a selection of local companies, events and sporting venues lined up for the Mascot Dash which was won in record time by Horti the Gardener from Vicarage Nurseries in Evesham, closely followed by the two ‘Wolves’ from Wolverhampton Wanderers. 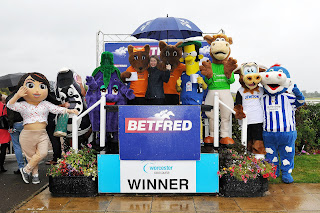 On the horseracing front, we enjoyed somewhat of a reoccurring theme with a number of horses following up on previous Worcester wins.

Among these were Sonneofpresenting trained by Kim Bailey, Nicky Henderson’s striking looking grey mare, Turn Turk, the Kerry Lee trained Desertmore Hill and Shanksforamillion who is trained in Carmarthen by Debra Hamer.

Shanksforamillion is an 8-year old lightly raced gelding with just 11 outings under rules to his career.  Five of these were at Ffos Las, one each at Uttoxeter, Ludlow and Taunton and the other 3 were at Worcester in the last 2 months.

There has been a remarkable transformation in the horse since he moved in June to Hamer’s yard.  His previous form from 2013 to 2015 reads 8/pu/8/pu/pu/3/6/8.  Since joining Hamer following a long break, and being partnered on each occasion by 7lb claimer Richard Patrick, he has won all three of his chases at Pitchcroft.

Hamer is well known for finding lots of improvement in Tobefair and saddling him to win 7 races on the bounce last season, the first two of which were also at Worcester in June and July of 2016.

A large syndicate of local owners from the Brewers Arms in St Johns were in fine voice despite the rain, following the victory in the £10,000 feature handicap hurdle of Destiny’s Gold trained in Claines by Richard Newland.  Newland has now sent out 4 winners from 7 runners in handicap hurdles at Worcester this season. 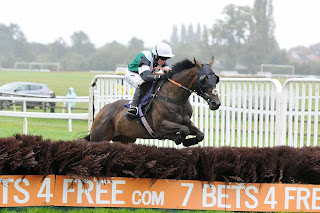 The win was particularly notable for the ride given him by 20-year old conditional jockey, Charlie Hammond from Abberley, whose confidence is going from strength to strength and who notched up 4 winners last week.

The meeting was rounded off by a win in the conditional jockeys’ maiden hurdle for Wiltshire trainer, Dai Williams with Mister Mister, partnered by another upcoming jockey who rode a double on the day, 16-year old James Bowen.

Williams has sent 100 runners to Worcester since 1989 without a winner until now, and was understandably delighted, if not a little surprised to see his September Storm gelding beat some more fancied opposition.

The racing action continues at Pitchcroft tomorrow afternoon with the first race due off at 2.05pm.
Posted by Worcester Racecourse at 14:52