The Richard Newland success story with his horses at Worcester Racecourse continues. Going into last week’s meeting, the Grand National Winning Claines trainer had had 6 winners from just 13 runners this summer, and 21 winners at the course in the past 5 years.

Newland sent 2 horses to the meeting, both ridden by Sam Twiston-Davies who was having his first rides back after a short spell on the side lines with a collarbone injury.

Duke Street was having his first run over fences in the Worcester News beginners chase and managed a creditable third place, beaten only one and a half lengths by the 8/11 hot favourite, Wait for Me trained by Philip Hobbs.

Newland’s other runner was Vosne Romanee in the £20,000 feature race, the Sparkling Anja Potze Fine Jewellery handicap chase.  The versatile six-year old picked up well after the last and ran on to win his 9th race for his trainer, previously scoring twice on the flat, 4 times over hurdles and twice over fences. 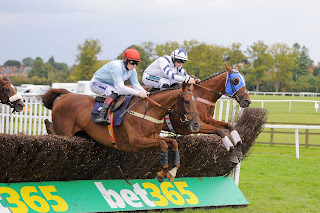 Cooper partnered Guiding Stars for trainer, Harry Whittington in the Herefordshire and Worcestershire Chamber of Commerce sponsored bumper.  Cooper, who won last year’s Cheltenham Gold Cup aboard Don Cossack, gave Guiding Stars, a 16,000 Euro purchase as a 3-year old, a positive ride but was just touched off into second place by the 8/13 favourite, Hatcher, trained at Alcester by Dan Skelton.

The interesting upcoming horse of the day for me, was the well-bred, 4-year old Galileo gelding, Counter Shy who won the concluding 7bets4free.com maiden hurdle under a confident Richie McLernon ride.

Sent off at odds of 14/1, Counter Shy was kept up with the pace by McLernon and was seemingly undeterred by the thoroughly distracting antics of two very novicey horses ahead of him.

Counter Shy gave us a second link to the Cheltenham Gold Cup on the day, as his trainer, Jonjo O’Neill also trained his dam, Cross the Flags, a half-sister to the 2012 Gold Cup winner, Synchronised.

Around 100 owners were treated to a champagne breakfast before visiting their horses in the yard and watching them work on the picturesque gallops, with far reaching views over the Cotswolds.

One of the challenges we face in racing is encouraging young people into the sport.  It was refreshing to see a group of 20 something year olds, enjoying the whole owners’ day experience, enthusiasm that I am sure they will transfer to the racecourse once their horse runs.

Tomorrow sees the annual Macmillan Cancer Support raceday at the course.  The popular coffee morning packages are now sold out but general entry tickets are still available on the gate and there are opportunities to support the charity fundraising in the marquee area, organised by the Ladies from Boots.

The gates open tomorrow from 12 noon.
Posted by Worcester Racecourse at 17:13