A remarkable £7,000 raised for Macmillan at the Big Macmillan Coffee Morning Raceday

Over the 16 years that I have worked at Worcester racecourse, I have tried to build specific annual racedays on a variety of different themes, to enhance our customers’ enjoyment of their day, promote local businesses and in a number of cases, help raise money for very worthy causes.

Recently, we staged the fourth, annual Macmillan Cancer Support race event on national Macmillan coffee morning day, an idea borne out of a small race sponsorship 5 years ago, where I met Heather Elliott who works for Boots in Birmingham.

From that little acorn has grown a sizeable oak tree.  Heather and Simone Chatwin, also from Boots, have worked tirelessly all year gathering prizes for the raffle & tombola, and assembling the 1,250 goody bags which they offered for donations on the day.

Thanks to the fantastic support of so many of our racegoers, over £7,000 was raised for Macmillan and I would like to thank all those who came along to the raceday, despite the early morning rain, and supported us with their amazing generosity. 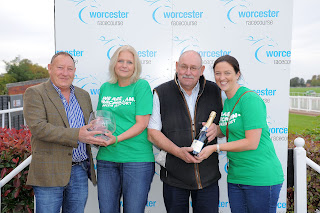 Nigel Twiston-Davies has recently stepped up a gear, with his winter jumpers already on great form.
At the last meeting, he sent 2 runners to the course and went home with 2 winners, giving him a tally of 5 winners in just 4 days.

The first was in the opening handicap chase when Little Pop, who runs in The New One and Blaklion colours of Simon and Sarah Such, led from the front to win his third chase, beating Neil Mulholland’s gelding, Full, by a length.

Mulholland was just denied again by Twiston-Davies in the second race when Ballymalin beat Night of Noir by half a length in the novice chase.

Ballymalin looks to be an interesting prospect for the future.  The Presenting gelding won 3 novice hurdles last winter and went on to run in the Pertemps final at the Cheltenham Festival in March, where he came 7th of 24 under Noel Fehily. 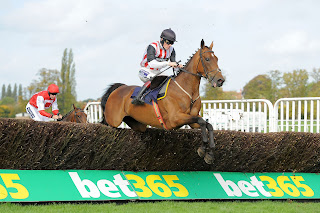 His final outing of last season was in the Grade 1 Sefton Novices Hurdle at the Grand National Aintree meeting in April, where he finished 5th of 11 under Sam Twiston-Davies.

The highlight of our recent raceday was the further success story of the remarkable Hallings Comet, trained by Sean Lycett.  The horse has now won 4 races at the course this summer and came second on the other occasion that he ran here.

Bred and owned by Lord Blyth at Moreton in Marsh, Hallings Comet had been stepped up in trip to 2 miles 4 furlongs, but this front running type bowled along effortlessly, ahead of the field all the way and won on the bridle. Jockey Marc Goldstein, who gets on so well with the horse, never picked up his stick.

With just 2 fixtures to go at Worcester this year, we are all particularly looking forward to Finals Day on 25 October, and especially the £25,000 final of the season long qualifying 7bets4free.com Fixed Brush Hurdle series.

The gates open for racing tomorrow at 12.20pm.
Posted by Worcester Racecourse at 10:20